You are Here: Home » News » Latics » Latics slip to defeat in final away game

Latics slip to defeat in final away game 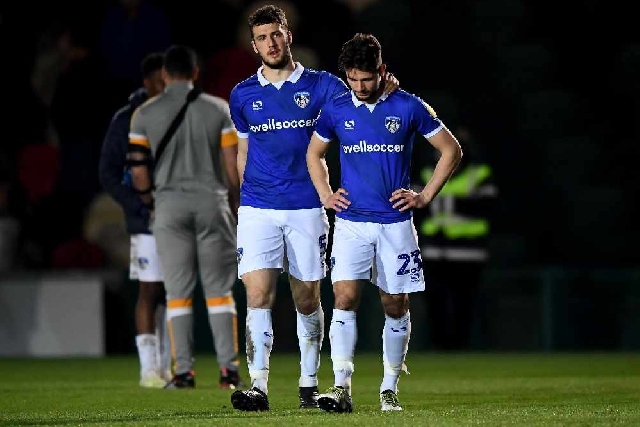 Newport moved into the playoffs with the win

Oldham Athletic signed off their season away from Boundary Park with defeat as they suffered back-to-back losses for the first time since Pete Wild took over the reins, in a 2-0 win for Newport County.

The victory helped the Exiles move into the League Two playoff places, a situation Latics were hoping to be in until their defeat at Exeter City last weekend.

However, those associated with Oldham were left to bemoan a poor refereeing decision which cost them the opening goal and one of their centre backs in the process.

With Peter Clarke having already left the pitch prior to halftime, George Edmundson found himself in a heap on the floor inside Oldham’s penalty area just three minutes after the restart.

Latics thought the referee was going to stop the game so the 21-year old could be treated but play continued with Mark O’Brien firing a shot home past Zeus De La Paz to give Newport the lead.

They doubled that advantage 11 minutes from the end of the game as Oldham pushed for a leveller.

Robbie Willmott scoring to seal the win for the home side and move them into the top seven in League Two at the expense of Exeter City.

The defeat, Pete Wild’s second since taking over following the resignation of Paul Scholes, leaves Oldham in 13th place in League Two with one game left.

Latics bring the curtain down on their season at home to Northampton Town this Saturday (4th May).