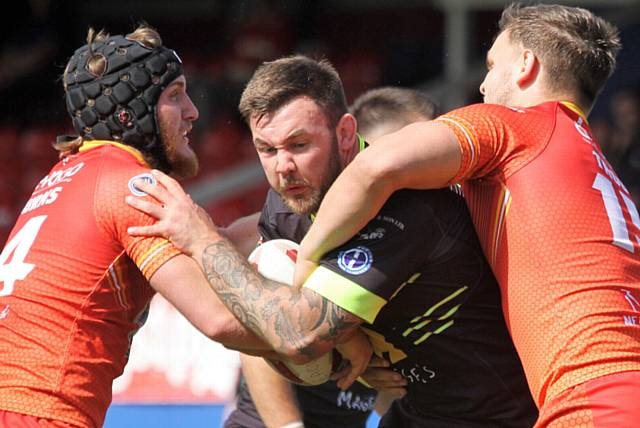 Experienced prop Ben Davies will be back at Oldham for a third season after signing a new one-year contract.

Davies (29) made 37 Super League appearances earlier in his career, but he joined Roughyeds from Whitehaven for the start of the 2017 Championship season.

He played 20 games for Scott Naylor’s men in his first season - a campaign in which Roughyeds were ripped apart by a shocking injury pile-up and paid the ultimate price by getting relegated.

In League 1 last season he was restricted to a dozen games, mainly because of a back problem that caused him to miss the early part of the season.

Said Naylor: “He missed a lot of pre-season work because of a back problem, which our physiotherapists have now sorted out.

“His vast experience is of great value to the team and you can see that from the way he plays.

“He’s a tough lad; he knows the game inside out; and he carries the ball superbly, as you would expect from a player who has played for so long at a high level.

“We need his experience and his know-how and it’s great that he is staying with us for 2019.”

For the record, most of Davies’s Super League appearances were for Widnes Vikings, bur he also played at the top level for Wigan and Castleford.

His new deal means Roughyeds have now signed ten players for 2019 - Hewitt, Crook, Grimshaw and Hawkyard in the backs and Nelmes, Wilkinson, Calland, Spencer, Bent and Davies in the forwards.