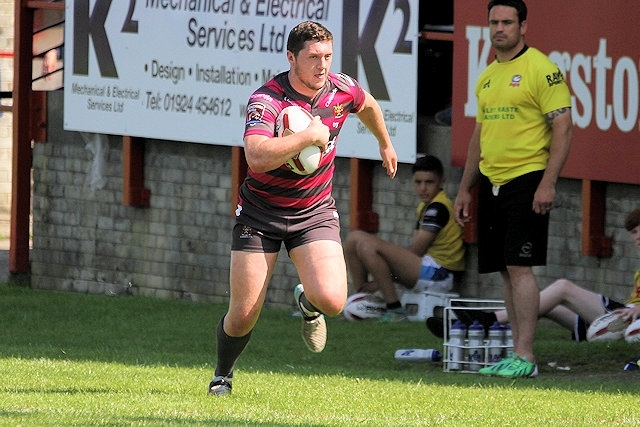 Jack Holmes will be striving for a third promotion in five years when a much-changed Oldham squad kicks off its Betfred League 1 campaign in 2019.

After appearing in 17 of the Roughyeds 30 games in all competitions last season, centre Holmes has signed a new one-year deal with the intention of getting more games under his belt in the battles that lie ahead.

"I like playing for Oldham, and I like the lads but I felt we didn't do ourselves justice last season," said the 24-year-old IT engineer, who is in his second spell at what is now named the Vestacare Stadium.

He sampled promotion celebrations with Oldham in 2015 and again with Rochdale Hornets in 2016 and he would love nothing better than to make it a promotion hat-trick in 2019.

Added Holmes: "We aimed to go up last season and we didn't get there so we'll be going all out to make amends in the coming campaign.

"That's the intention of all the lads who are staying and I know the new boys will buy into it too.

"On a personal note I aimed for more game time than I actually got so I'll be pushing to keep a starting spot at centre.

"The new signings are going to improve us and freshen up the group."

Said coach Scott Naylor: "We needed to freshen up the backs, but there were also lads in there who we were keen to keep and Jack definitely came into that category.

"He left us to go to Rochdale in 2016, but he was very happy to come back which is always a good sign.

"He's played in this division for several years and he's got a lot of experience.

"He can play centre or wing, which gives us options, and he's a lad you can always rely on."

In 53 games for Roughyeds, spread either side of his season-and-a-half at Rochdale, Holmes has scored an impressive 26 tries, the equivalent of one every other game.

The club office inside the Vestacare Stadium will be open for the sale of season tickets between 10am and 3pm today (Wednesday) and between the same times on Friday (payment by cash or cheque only).