You are Here: Home » News » Roughyeds » One of Roughyeds longest-serving supporters dies aged 90 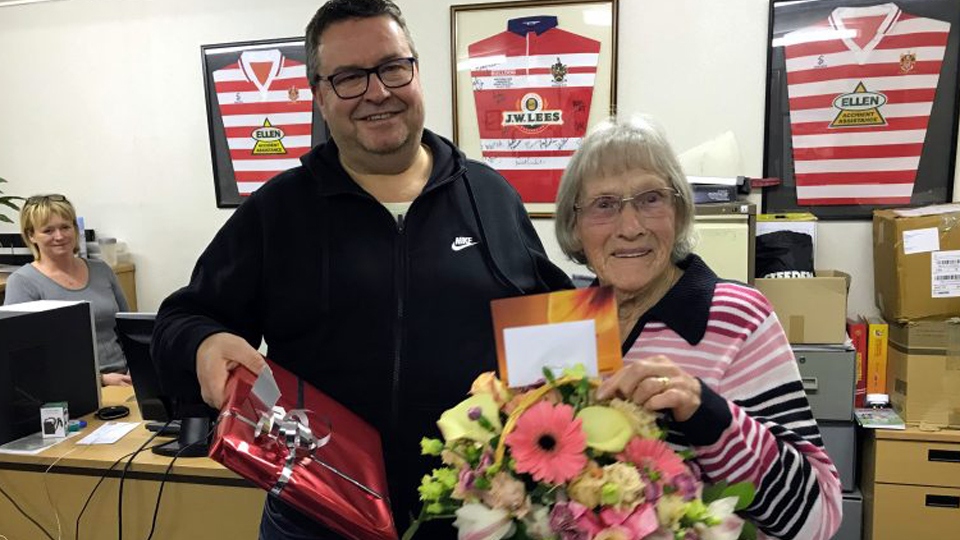 Clarice pictured with Roughyeds chairman Chris Hamilton at her surprise 90th birthday party at the club.

Clarice Stevens, one of Oldham RLFC's longest-serving and most loyal supporters, has died in Wythenshawe Hospital, Manchester, aged 90.

She had been supporting the club since she was aged 17 and, until late last season, she regularly attended home games, travelling to Oldham on public transport, with all the problems that can throw up on Sundays, from her home in Timperley, near Altrincham, Cheshire.

Describing her death as a "very sad loss for the club", chairman Chris Hamilton said, "Clarice supported the club for most of her long life and continued to do so following the death of her husband Jack a few years go.

"For years she travelled on her own on bus,tram and sometimes train from Timperley to venues like Sedgley Park (Prestwich), the Vestacare Stadium (Oldham) and Bower Fold (Stalybridge) and until well into last season  she hardly ever missed a home game.

"She was more than a supporter; she became a really good friend. And it was a pleasure for me to run her home to Timperley after home games when I had finished all the post-match stuff that had to be done.

"She really appreciated that but it was the least I could do after all the astonishing effort she made, in her late 80s, to get to home games and to show her support. That lady had an iron will when it came to supporting Oldham Rugby and no words of mine can truly reflect how much that was appreciated and recognised.

"Even when she became ill and couldn't get to games any more she always wanted to be kept informed of what was happening; how the team was playing; and everything about the club."

In mid-February, 2019 the club and many of her close Oldham Rugby friends celebrated her 90th birthday with her at a surprise party, organised by Chris and the club.

She said then: "Oldham Rugby meant the word to me since I was a teenager and there was no way I could ever have supported any other club or any other sport.

"We had moved out to Timperley in Cheshire, from Oldham, when my dear husband died and it then presented a bit of a challenge getting to home games,  but it was something I was determined to do."