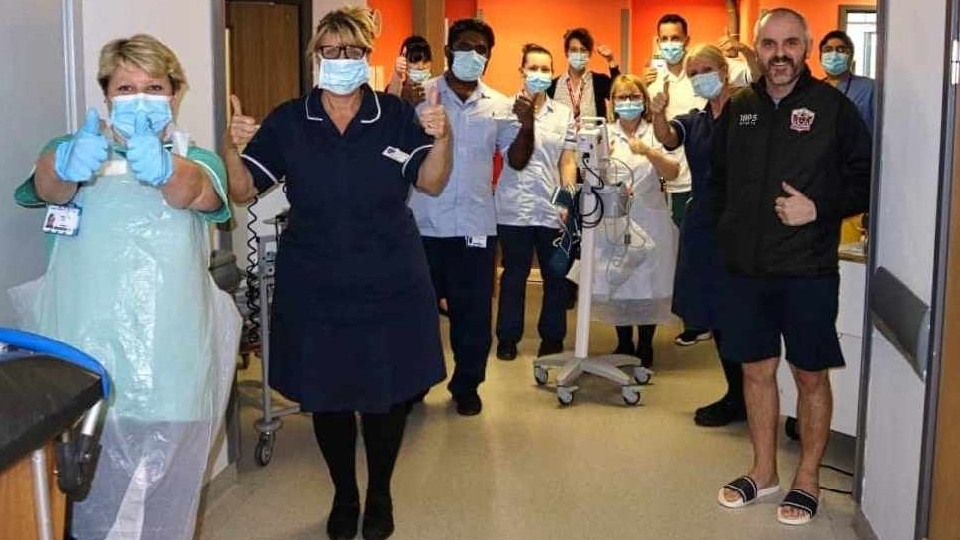 Thanks for saving my life! Shez ready to leave for home after his touching message of thanks to the wonderful NHS staff at Pinderfields Hospital in Wakefield

Brendan Sheridan, Oldham RL Club's assistant coach, has told the story of his ongoing battle to beat coronavirus to a world-wide audience.

In a television link-up, he was one of several people to be interviewed by internationally-known journalist and BBC presenter Philippa Thomas, main presenter of the BBC's World News Today.

Others interviewed on the programme, 'Coronaviris - Your Stories' included Brett Breslow, a 50-year-old veteran of the United States Navy, who was speaking from New Jersey and facing a similar battle to Brendan, and a young doctor, Bhasha Mukherjee, who was crowned Miss England in 2019 and who has returned from charity work overseas to work in the UK as a front-line doctor amid the pandemic.

Philippa, who was brought up in Wakefield, simultaneously interviewed Brendan from his Dewsbury home and Brett Breslow in the USA.

Brendan, who was in an induced coma for two weeks in Pinderfields Hospital, Wakefield, is now recovering well physically, but is struggling to come to terms mentally with all he has been through.

He said he was still getting flashbacks of his time in hospital, where he owed his life to the brilliant NHS doctors and nurses, and he couldn't get a decent night's sleep.

He said he was struggling mentally and hadn't slept more than 16 hours in the last two weeks.

The programme highlighted how the virus could severely attack relatively young and strong men like Brendan and Brett and how it could affect them mentally as well as physically.

Thanks to the help and intervention of Oldham chairman Chris Hamilton and Steve McCormack at Rugby League Cares, Brendan has now been referred to Sporting Chance, a clinic that specialises in dealing with post-traumatic stress disorder.

He said: "I've been haunted by thoughts in hospital of not being able to say goodbye to my family.

"I couldn't move in the hospital bed and when you're in a ventilator it's very claustrophobic.

"There were some dark days and I was looking at a machine 18 hours a day hoping my oxygen levels were going up.

"It's very difficult to deal with it all.

"Physically, I feel fine now but it's hard to process everything else."