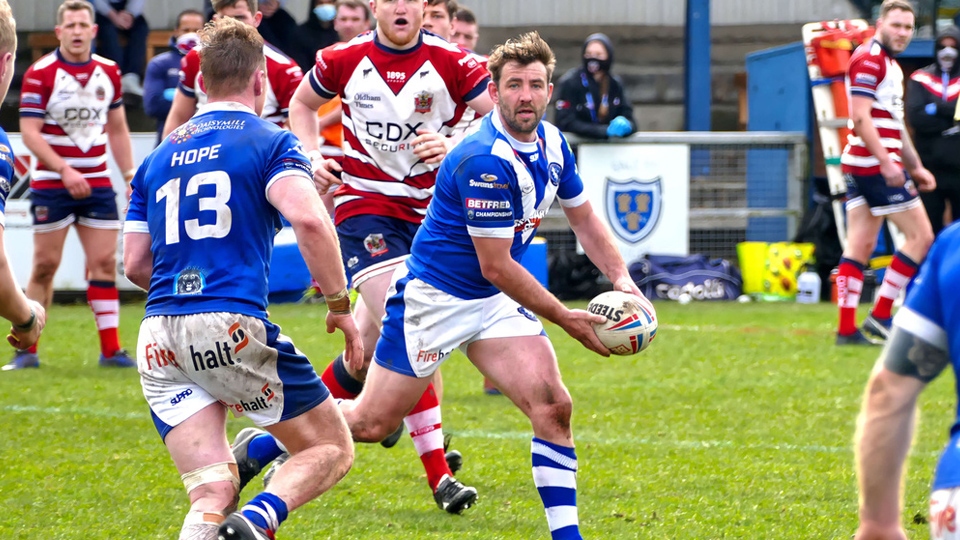 Martyn Ridyard in action for Swinton against Oldham in 2021

Hugely-experienced play-maker and organiser Martyn Ridyard will be Oldham Rugby League Club's "old head" in a comparatively young Roughyeds side next season.

A creative stand-off, goalkicker and schemer-in-chief, Ridyard has signed a one-year contract to cement his link-up with Oldham's new head coach Stuart Littler, which goes back years to the days when they played in the same Leigh Centurions side.

One of the Championship's best and most illustrious players of the last decade, Ridyard is in the twilight of his career at the age of 35, but Littler is 100 per cent confident in his belief that here is the sort of player his team will need to guide them around the field and to take charge.

"He will be my voice out there," said Littler, adding: "I saw quite a bit of Oldham last year and I'm sure Martyn's knowledge, experience and ability will help me to educate the side in how to play an attacking and entertaining brand of rugby league. He'll be on the pitch, I won't."

Coming through the ranks at Leigh Miners, Ridyard was capped by BARLA Young Lions and Great Britain Community Lions before he signed for the Centurions in 2009, enjoying enormous success during his first spell with his home-town club, which lasted eight years.

Brief spells at Huddersfield on loan and then at Featherstone preceded his return to Leigh in 2019.

Said Ridyard: "Stu was a massive influence on my decision to join Oldham, obviously. He and I go back a long way. We are firm friends. He got me to Swinton last year and got me enjoying my rugby again. It was a period of great change, involving going from full-time rugby to part time, but to be honest it was the best thing that could have happened to me.

"I'm back working as a roofer -- the real world -- and I'm loving it. I can highly recommend part-time rugby. It's tough and very demanding, but you can divide your life into three -- home and family, day job and rugby -- and if you get the balance right it's great.

"Despite the poor results, the one season I had at Swinton was the most enjoyable I've had for a long time. I've never been on a losing side as often, going right back to junior days, but I enjoyed being part of a great bunch of lads, who were not only good players, but good people.

"The mateship and camaraderie were brlliant and that's something else I love about part-time rugby. I'm sure the Oldham lads from last season would say the same.

"Don't tell too many people I'm 35, but I still have a lot left in me. I always said the aches and pains after a match would tell me when it was time to go, but in all honesty I feel as fit as I've ever done.

"I'm looking forward immensely to the new challenge. I've never played in League One before. People tell me it's really tough and competitive."

Littler said: "Martyn has loads of experience and, in rugby league terms, he's certainly got the T-shirt. He knows the game inside out and he's very smart in decision-making.

"He has loads to offer and his enthusiasm is infectious. He doesn't miss many games or training sessions. He'll be great with the younger players and I see no negatives at all in having him on board as an important part of our journey to rebuild the club and carry it forward.

"On top of everything else, he's a good talker and he's a winner -- and we want to win things at Oldham."

Turning to the squad building overall, Littler said: "We are getting a good group together and we are hoping people will see what we are trying to do and will want to come and join us.

"We are tryng to build bridges and to get some real Oldham ownership within the team.

"It's a building process and we've a long way to go, but the bricks are coming together, no doubt about that."