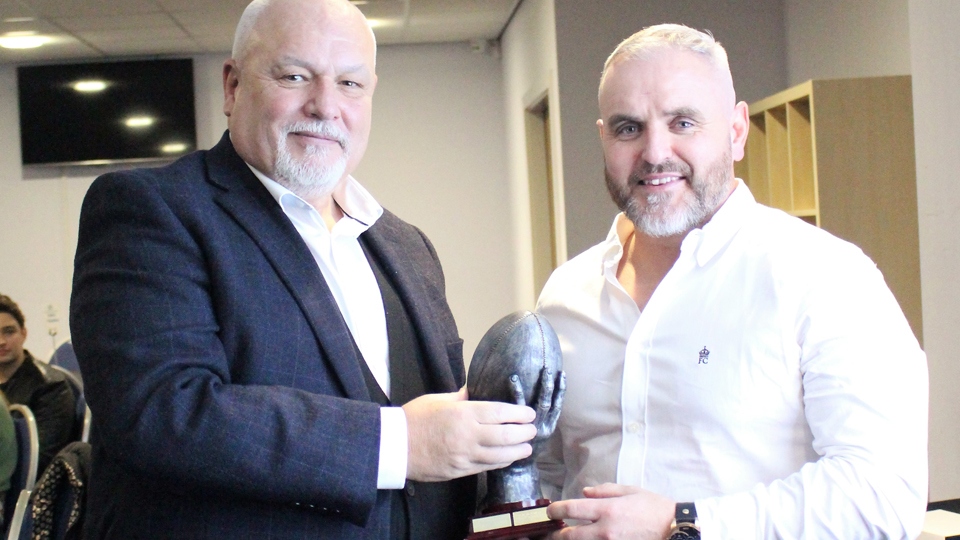 Oldham Rugby League Club officials, players, fans, backroom staff and coaches met at the Oldham Event Centre, Boundary Park on Saturday night to formally put the ill-fated 2021 season to bed and to look forward positively to next year and to new beginnings in Betfred League One.

A fresh start it certainly will be with a new head coach in Stu Littler, a newly-appointed vice-chairman in John Roddy and, by the time recruitment has finished, almost a brand-new squad.

Most of the relegation season's 2021 squad have either retired or moved on to other clubs, but of all the comings and goings so far the one that has attracted most attention is the signing by Oldham of veteran half-back Martyn Ridyard, whom Roughyeds fans have welcomed with open arms in the belief that he can hold a young side together and point them in the right direction.

Kit man Sam Doyle received the Unsing Hero trophy; vice-chairman John Roddy, who is also managing director of the club's main sponsors, CDX Security, got a special award on behalf of his company; assistant coach Brendan Sheridan was named clubman of the year.

There were special awards also for back-row forward Danny Langtree, who is moving to Barrow Raiders after nearly ten years at the club and for prop Phil Joy and club captain Gareth Owen, who are retiring after each giving their home-town club almost as much service as 'Langers'.

Langtree's award, which was also in recognition of his 94 tries --- an all-time club record for a forward -- was received by his close pal and Oldham team mate Dave Hewitt, who has re-signed for 2022.

In receiving his clubman-of-the-year trophy, assistant coach Brendan Sheridan spoke briefly of his 2020 fight for life after he had spent five weeks in a Wakefield hospital when suffering from Covid and spending two weeks in a self-induced coma.

He went on: "I'm honoured and embarrassed. Chris Hamilton has done things for me, over and above the professional environment, which I will remember for the rest of my life.

"I'm a Dewsbury man, but if I could stay at this club for the rest of my life that would be an achievement that I would treasure."

Sheridan, younger brother of former Leeds and Great Britain star Ryan Sheridan, has worked at Oldham alongside Matt Diskin and Brian McDermott and he has already been named as No 2 to the incoming Stu Littler.

When he put pen to paper on another one-year deal, chairman Hamilton said: "Shez (Sheridan) very quickly became an important part of the club when he first joined us.

"He has bought into what we are trying to do and his enthusiasm for game and club is infectious.

"I'm sure he will be the first to agree that he has learned a lot here. We are his first pro club as a coach. Who wouldn't learn when working alongside Matt Diskin, Brian McDermott and now Stuart Littler. ?"

Speaking to fans on Saturday night, the chairman said: "This close season we'll have the biggest turnover of players for years, but it provides an opportunity for others to come forward, to put their stamp on the club and emulate those who went before them.

"What we have in Stuart Littler is a coach who is full of enthusiasm and who is looking to play attractive rugby.

"We are looking to provide him with good people and good characters as well as good players. That is important. To that end, I am really pleased at the players we have signed so far."

The evening ended with a screened link-up in London with former coaching consultant Brian McDermott, whose short-term agreement with Roughyeds ended when the season was over.

He said: "I'll never forget my time at Oldham. I've never had players who were so committed.