You are Here: Home » News » Roughyeds » A 'famous five' leadership group at Oldham 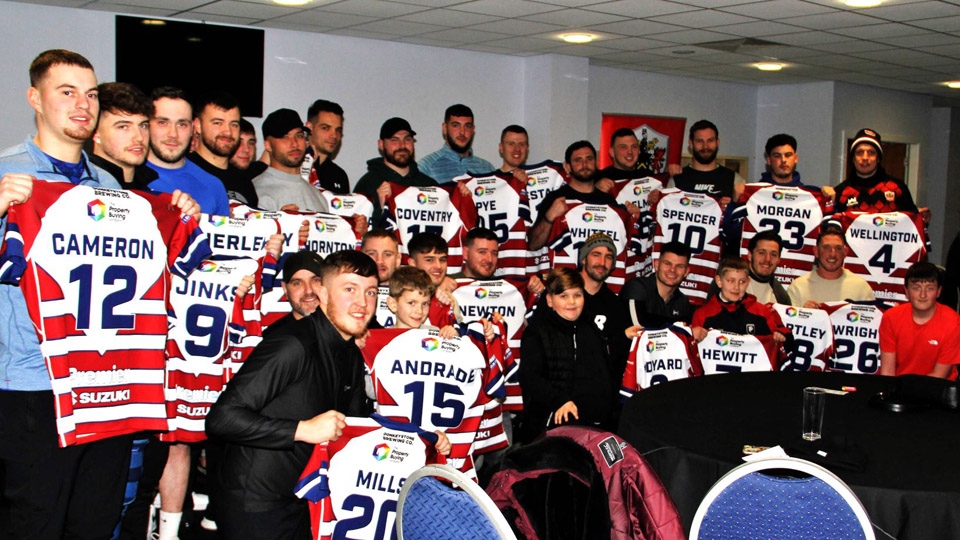 Club captain Martyn Ridyard and vice-captain Luke Nelmes will be joined by Tom Spencer, David Hewitt and Jordan Andrade as the men charged with the responsibility of using their experience to lead from the front.

Littler revealed his leaders - average age 29 - at the club's official 2022 launch for players and fans alike in the Oldham Event Centre at Boundary Park, the highlight of which was the presentation to each player of his shirt and squad number.

Each player stepped forward to receive his numbered shirt from Littler, to be photographed and then to be interviewed by club chairman Chris Hamilton.

The main theme running through the interviews was the players' desire to go all out for promotion and the individual and collective belief that they were fully capable of achieving their goal.

Other key words emerging from the players were 'family', 'closely-knit', 'togetherness', 'core values' and 'attractive rugby'.

Fans hung on to every word, queuing up afterwards to take pictures and many of them to express the view that they couldn't wait for the season to start this Saturday.

Addressing fans in his opening remarks,  Littler said: "We want to entertain you with attractive rugby and then see our crowds get bigger as we grow as a team.

"We pride ourselves on core values because we want to get it right.

"At the same time, we recognise that these players all have full-time jobs and family commitments, so we have to get the balance right."

He said that, throughout the tough and demanding pre-season programme, the players had stuck together and had shown great qualities that would stand them in good stead during times of adversity.

He said he was 'excited' by what he had seen so far and he had every confidence in his squad. He would play the 'underdogs' card for as long as he could.

In a reference to team selection, he added: "We've 25 players and we can only play 17. We name the team, of course, but in reality it's the players themselves who pick it  with their performances in games and on the training ground.

"We've tried to be smart in recruitment by building a squad that can provide two or three players for each position."

And in conclusion he urged fans: "Give us your backing. The more the merrier."

Some of the comments from players went like this:

Tommy Brierley: "As soon as I knew Oldham wanted me for a second season it was a no-brainer. I see no reason why we can't be going back up into the Championship."

Will Cooke: "At interview for signing, I felt really wanted. That was important to me. After a few months here, I'm loving it. It's the little things that count. And in training we are nailing it."

Martyn Ridyard: "To captain the side is an honour and a privilege. I'm not a good loser. I want to win every game. We won't say much, we'll just keep working hard and taking each game as it comes."

David Hewitt: "From the moment I stepped through the door for the first time six years ago, I knew I was at home at Oldham. I just feel right here; comfortable. The challenge for us this year is to get back into the Championship where we belong."

Luke Nelmes: "In 2019 I walked away from Oldham -- and away from rugby. How I came to regret that ! I have to thank Chris (Hamilton) for getting me back. At the time I had a lot of things going on away from rugby, but Oldham is a good club to be at and it was great to get back."

Tom Spencer: "My department within the Leadership Group is 'standards' -- a role in which I can help the younger lads which, in turn, will help me with my plans for life after rugby. I'm doing sports science at university. My aim is to finish my playing days here, but not before we are back in the Championship."

Emmerson Whittel: "I was gutted to leave Oldham in the first place. I had a new offer on the table, but at the time I had no ties and I saw it as my last chance to go Down Under, play rugby and see a bit of the world. My hopes for 2022 are to keep developing as a player and to be playing in the Championship next year -- with Oldham."

James Thornton: "Oldham ticked all the boxes for me and I'm loving it here. The other lads can have the glory and score all the tries. I won't shy away from doing the hard yards or carrying the ball out of defence. None of us will, I know, but it's what I do. I think I've paid for it with injuries in the past, but I'm fighting fit now."

Jack Coventry: "We want to get promoted and that will be our goal. In pre-season, everyone has been class. We've got a good group and we've got to rip in."

Joe Hartley: "As an Oldham lad it means a lot to me to play for Roughyeds."