You are Here: Home » News » Manic-festo 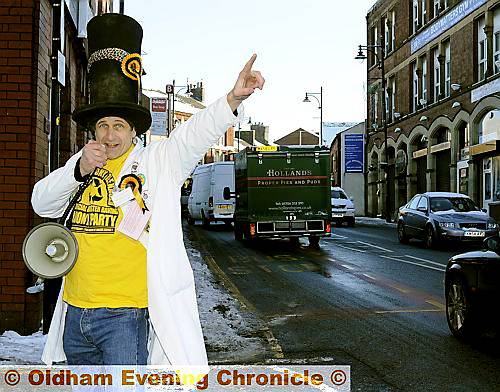 THE Flying Brick is his name — and politics is his game.

Shouting messages through his megaphone yesterday, 45-year-old Nick Delves has set his hopes on fighting the Oldham East and Saddleworth by-election for the Monster Raving Loony party.

The 6ft 5in larger-than-life character sported a foam top hat and a lab-coat to take to the village streets to find 10 voters to support him in his bid.

Nominations have to be in by Thursday and Mr Delves is hoping his “manic-festo” policies will provide an alternative vote to those disillusioned with the main parties.

He said: “I’m hoping to slander all the other candidates as much as possible and thereby create another by-election with a campaign as dirty as hell. For the farmers in Saddleworth I will repeal a ruling to allow them to muck-spread in ice and snow, the best time for it, and even give them extra work to spread out all the political gobbledegook that comes from local politicians.”

The house-husband, from Derbyshire, is the treasurer for the party and has stood in his home constituency in elections since 1997. If elected, he promises to convert the Queen Elizabeth Hall into a spoon-bending arena, introduce alligators into local rivers and provide free toboggans and skis for voters to get to the polling booths on January 13.

The Flying Brick nickname stuck after his passion for paragliding ended in a South African disaster when he spiralled out of control, slammed into the ground and broke his pelvis — an experience that influenced one of his policies.

He said: “Ever since then I have been campaigning to abolish gravity, it’s been a vendetta. It could cause some problems with sport but will be ideal for traffic problems in this magnificent town.”

Urging voters to have a “radical rethink” he said: “I am aiming to win this election.”