You are Here: Home » News » 'Action needed' to end abuse towards women 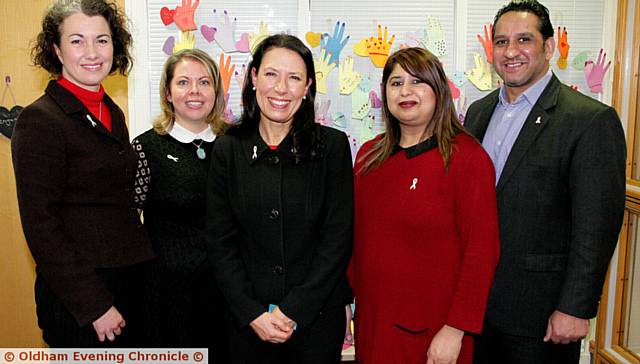 WOMEN and Equalities, Oldham, had a visit from the Shadow Secretary of State for Women and Equalities Sally Champion, left, She is pictured with Sally Bonnie, director and founder of Inspire Oldham, Debbie Abrahams, MP, Councillor Yasmin Toor and Ikram Butt from White Ribbon Campaign, men working to end violence against women

MORE funding and more people on the ground are needed to prevent girls and women becoming victims of violence and sexual exploitation.

This was the message from Sarah Champion, shadow secretary of state for women and equalities, when she visited Oldham to find out more about the work being done to tackle the issue.

She joined Oldham West and Saddleworth MP Debbie Abrahams at Media Chambers, the home of the Inspire Women Oldham project which helps women to build their self confidence and independence, and resolve issues in their lives.

They also talked to representatives from the The Collective Partnership, which develops programmes and services for women.

The aim was to identify what services are available, what is still needed and if things need to be done differently.

They then went on to visit members of Project Phoenix, a police-led team which focuses on child sexual exploitation.

Ms Champion is MP for Rotherham, which hit the headlines for the widespread sexual abuse of girls in the town.

She said: "The figures you know are literally the tip of the iceberg, both in my constituency but also across the country.

"But I actually think the women in this room won't be surprised at that because I'm yet to find a woman who didn't have something exploitative happen to them when they were a child , a teenager or as a woman."

"You can have the best legislation in the world but unless you have actually got the people on the ground doing the intervention, it's pointless."

She said that more work needed to be done with children to prevent people becoming abusers, adding: "Protecting women and girls from violence and sexual exploitation is a priority for Debbie here in Oldham, as it is for me as the shadow minister for women, and it's not an issue we are prepared to have swept under the carpet as it has been in the past.

"Discussions, like this one organised by the Collective Partnership, where women can talk openly and in safety, are crucial to allow us to gather evidence and work towards finding meaningful solutions to an ingrained problem."

Mrs Abrahams said: "Domestic violence and sexual exploitation against women and girls happens across the country and in all communities.

"I'm working with Oldham Council, Greater Manchester Police, Women's Aid and other partners to raise awareness with young people about the issues, providing support for women who have been affected and ensuring appropriate responses to the issue from the justice system are carried out.

"Each week across the UK two women die at the hands of their current or former partners and three more commit suicide. This is completely unacceptable, it must be stopped, and we must all play our part in preventing it.

"Talking with members of Inspire Women, the Collective Partnership and partners really highlighted how far we've come in terms of tackling these issues but, at the same time, makes us realise we still have a long way to go. But we're determined to do everything we can to break the cycle of violence against women and young girls."