You are Here: Home » News » MPs join the campaign against housing plans 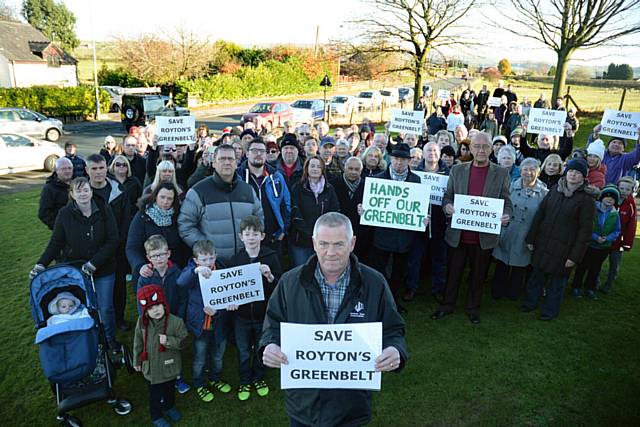 Campaigners have support from MPs Debbie Abrahams and Andy Burnham, who have challenged the draft plan, prepared by the 10 councils in the Greater Manchester Combined Authority.

The GMSF sets out a plan to provide housing and investment opportunities for sustainable growth over the next 20 years.

The draft plan, which was under public consultation until January 16, has proposed to build hundreds of new properties at land in Oldham including Hanging Chadder, Cowlishaw, Beal Valley and east and west of the A627M, amongst others.

Thousands of people have criticised the proposals, specifically the plans to build on green belt land and across the region.

Oldham East and Saddleworth MP Debbie Abrahams has urged people to create a petition which she will then deliver in Parliament.

Mrs Abrahams has given a huge thumbs up to Save Shaw's Greenbelt, one of the protest groups.

She said: "The framework is actually a legal requirement, so it's not going to go away. But remember, this is only the draft.

"I would urge the Shaw group to create a petition that I would be happy to deliver to Parliament, and I would also urge you to start lobbying your local councillors."

Steve Lord, from Save Shaw's Greenbelt, said: "It was important for us to meet our local MP. I'm delighted to say that she was one hundred per cent behind our group.

"Her response has given us confidence that we're on the right track, and high hopes that the draconian plans for Shaw and Crompton will eventually be scrapped."

The Shaw group are now preparing for a march on Manchester Town Hall on April 1 where they will join forces with all the other action groups protesting against green belt destruction within the Greater Manchester Spatial Framework.

This follows the group's hugely successful first march on January 2 when, along with Royton and Newhey, some 3,000 protestors gathered at Tandle Hill country park in Royton.

The Shaw group already have a Facebook page with nearly 1,500 members and have delivered 1,300 objection letters to Manchester Town Hall.

Mr Burnham has previously said the plan is in need of a "radical re-write that results in a substantial reduction in loss of green belt." Mr Burnham said he supports the level of ambition set out in the draft framework but it must "extend beyond sheer numbers."

Meg Langton, spokesperson for the Trust, said: "Outside of the Manchester city centre there are many fine former cotton mills and warehouses now redundant that would make excellent high density accommodation.

"These should be encouraged, improved and recognised for the contribution they make."

Oldham West and Royton MP Jim McMahon said the plan represents a "significant over-development of the north of the borough of Oldham which will damage the character of many neighbourhoods."

CPRE wants to see the much needed development built in sustainable locations, with adequate supporting infrastructure to make places better in the future.

An independent expert demographer found flaws in the housing calculations, leading to at least 30,000 more houses being planned than are necessary.

"This will ensure needed development can take place but this must first be on Greater Manchester's brownfield land."