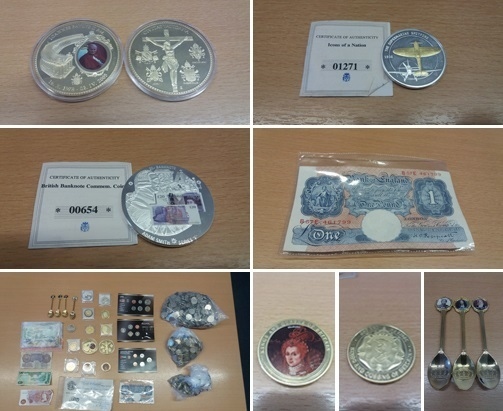 RECOVERED . . . Coins, spoons and other items which police found during a house raid in December

POLICE are appealing for the owner of a coin collection which is suspected to be stolen to come forward.

A search warrant was carried out on Sunday, December 11, at a house on Reins Lee Road, Ashton-under-Lyne, where a number of items were recovered.

Among the items recovered were a vast coin collection and a quantity of jewellery as well as a large quantity of drugs and cash.

Two men, aged 49 and 20, were arrested on suspicion of possession with intent to supply drugs and have been bailed until March.

Det Sgt Nick Helme, of Challenger Tameside's Organised Crime Team, said: "I'm appealing to anyone who recognises the items or has any information about them to contact police so we can reunite them with their owners.

"They could have a significant sentimental value and we want to find out how the items came to be at the property."