You are Here: Home » News » Luke set to earn his stripes for England

Luke set to earn his stripes for England 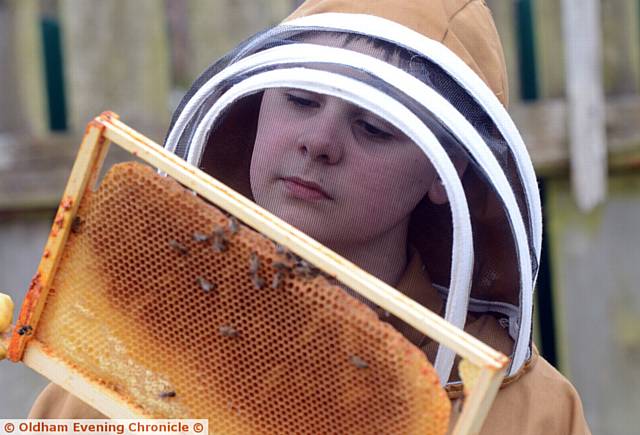 LUKE'S buzzing now he has been selected to represent England

A SCHOOLBOY from Failsworth is buzzing for his opportunity to represent England on an international stage.

Luke Charnock (14) is one of four young people who will represent England at the International Meeting of Young Beekeepers (IMYB) in July.

The Failsworth School Specialist Sports College pupil was diagnosed with T Cell Lymphoblastic Lymphoma in April 2013 but turned to beekeeping as part of his recovery process.

Luke was confined to a wheelchair while he underwent three years of chemotherapy for the cancer which caused his white blood cells to grow in an uncontrollable way.

Mum Catherine Charnock said: "Luke suffered really badly with side effects including pancreatitis which put him in the High Dependency Unit (HDU).

"We are very lucky Luke is here today as lots of the children who were in hospital with us are not.

"Everyone is extremely proud of Luke. We share his news with everyone who knows us because without these people Luke wouldn't be here today."

He and his mum came across bee keeping through mentor Diane Drinkwater, of Cartmel Crescent Allotment Apiary Project, a beekeeping training area in south Chadderton.

Luke is responsible for his own hive which has three colonies. He has enjoyed learning about the bees, how they manage their young, and how they forage.

Catherine said: "I always fancied keeping bees but never had the courage or time to do anything about it.

"We had the idea that Luke would build the kit - he took part in a hive building workshop and was hooked - and I would keep the bees."

While Luke has been busy building kits and hives Catherine has helped set up a new bee group called Medlock BKA (Beekeepers Association).

Catherine said: "We attended the IMYB selection day with the idea that it would be a lovely day out.

"We never imagined Luke would make reserve for the team. We are really pleased and are looking forward to our next trip in April."

Some 23 countries are set to be represented at this year's IMYB, organised by the British Beekeepers Association (BBKA).

The annual event sees teams of three competitors accompanied by at least one adult team leader take part in a series of practical assessments.

This year's IMYB will take place between July 6 and July 9 at Marlborough College, in Wiltshire.