You are Here: Home » News » Candidates are quizzed by students

Candidates are quizzed by students 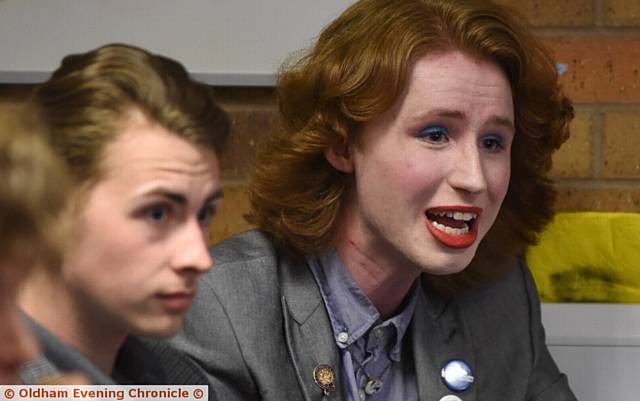 TOUGH questions on immigration, the economy and even Jeremy Corbyn's leadership were put forward to Labour politicians.

Students at Oldham Sixth Form College did not hold back during a Q&A session yesterday, when Labour's general secretary Iain McNicol visited along with Oldham candidates Debbie Abrahams and Jim McMahon who are hoping to retain their seats in the General Election on June 8.

Mr McNicol, who was in Trafford earlier in the day with Mr Corbyn at the launch of the Labour party campaign, told the Chronicle: "This election is about choice and for Labour it's about the many not the few.

"The questions the students asked were brilliant. They were really engaging and it's nice to see politicians put on the spot."

Mrs Abrahams, Oldham East and Saddleworth candidate, spoke about some of her achievements in government and working in the NHS.

She said: "It has been an absolute honour. It's about empowering you to take control and influence your lives for the better. We want to make a better future for all of you."

Mr McMahon, candidate for Oldham West and Royton, talked about his time as Oldham Council leader.

He said: "The power of democracy is that you have the personal choice when you go to the ballot box and exercise your judgement.

"When you walk around a town like Oldham you see the condition of some of our houses, our chronically underfunded schools, the waiting lists for hospitals and GP practices.

"Change happens in this country because we have secured the right to vote."

The students, many of whom will be first-time voters, asked questions on tuition fees, the deficit, fair wages, immigration and even grammar schools.

The panel answered most questions, but some could not be answered as they are waiting until the launch of the party's manifesto later this month.

Some students were sceptical of Labour's record on the economy.

Politics student Tom Hulme, who will be eligible to vote as his 18th birthday is four days before the General Election, questioned Mr Corbyn's policy on abolishing parking fees at hospitals.Tom believed this policy is ill-thought out and questioned Labour's economics.

After the event, he said: "It was certainly good to welcome our MPs here to meet with us. I'm voting Conservative. It's clear the Labour candidates have no confidence in Jeremy Corbyn's leadership. They failed to back him sufficiently."

Mr McMahon replied: "I agree, after this election we need a strong and stable opposition. Theresa May was a terrible Home Secretary, she is a terrible Prime Minister and she would make a terrible leader of the opposition."

Brandon, who is voting for the Conservatives, said: "This is a really vital event which allows questions to be asked to our MPs. However, some questions were not really answered. I thought it was rather rude when the MPs took the opportunity to mock and laugh at the people asking questions. They should respect what we have got to say."

He believes the college should organise an event where all the political parties are present to answer questions.

Politics student Jamie Bohanna, aged 18, was impressed by the candidates' answers. She is a Green Party supporter who will be voting Labour as her party is not putting up a candidate in her constituency.

Jamie said: "I thought a lot of the questions were very well answered. Debbie Abrahams was very well spoken."