You are Here: Home » News » Powered by its people

Powered by its people 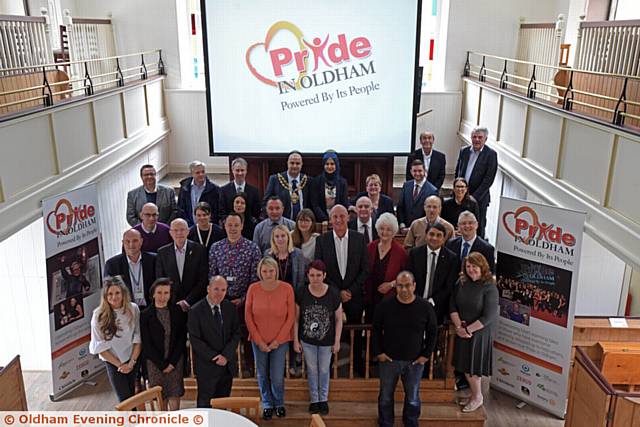 ALL together now . . . at the George Street Chapel

IT'S a celebration to honour the heart of who we are as Oldhamers ­- the humility, compassion, kindness and strength that makes up the very fabric of the borough.

Today The Chronicle is proud to launch our 2017 Pride in Oldham awards, a search that shines a much deserved spotlight on those who do so much but demand nothing in return.

It is time to honour the true community champions who make a massive difference to the lives of others and the unsung heroes who inspire and achieve simply because they care.

In our 16th year of Pride in Oldham we want you to help us give these outstanding groups and individuals the recognition they deserve and their time to shine at our glittering awards ceremony at Queen Elizabeth Hall on November 24.

The finalists and winners will be saluted by the great and good of Oldham and given a trophy and memory to cherish.

At a launch event on Thursday in the stunningly renovated George Street Chapel, from which its volunteer guides who bring the past to life for visitors were finalists in the Pride in Oldham 2015 awards, The Chronicle's managing editor, David Whaley, paid tribute to past Pride winners and the sponsors and supporters who have given backing over the years.

Describing them as the "heart" of Pride in Oldham, he said: "We launched Pride in Oldham in 2002 on the back of the Oldham riots when the town was getting such a bad press and every time it got a mention in the media there was a police van in the background.

"We knew there were lots of great stories to tell and we wanted to tell them.

"We are exceptionally proud of Pride as a town and as a newspaper.

"For the people who are Pride finalists it is a chance to step into a spotlight they have never been in in their lives. For some walking on that red carpet will be the biggest moment of their lives.

"Some of the back stories we hear are incredibly heart-warming and it's humbling to hear them."

There were also representatives from this year's sponsors who are Molnlycke, one of the first sponsors, Stoller Charitable Trust, Oldham Council, Rotary Club of Oldham Metro, long-standing sponsor JW Lees, First Choice Homes and 2017 newcomers Tesco and Asian Business Leaders.

Councillor Stretton said: "Pride is a massive event for the town and it's become a landmark event in Oldham's calendar.

"It's about the people of Oldham who give their time and do not seek any thanks. They do it because of the people they are and Pride is a chance to say thankyou to them."

The event welcomed some of last year's Pride recipients to the launch including support worker Katy Peet and project manager Martin Sutton from Oldham Young Carers who won the 2016 professional category.

"It was brilliant to be recognised," said Katy. "We go about our daily work and the young people we work with are inspiring in themselves. Winning the award was incredible."

Martin added: "The camaraderie that goes on between finalists and winners is great because we all want each other to know we're in it together."

For Lynn Ball and Angela Thomas, from Inspiring Women, which took the Group gong in 2016, Pride was a night they'll never forget.

Lynn said: "It really did raise our profile and has helped us reach out to many more women as a result."

Former chief executive of Oldham Athletic, Alan Hardy, is a judge who has to choose from the nominees.

"I would like to congratulate The Chronicle on their 15 years of Pride in Oldham," he said.

As always the awards celebrate individuals and groups who go above and beyond the call of duty ­from charity stalwarts and groundbreaking groups to dedicated professionals and amazing schools.

Nominees can be put forward in a range of categories - voluntary, professional, group, business, health worker, education worker and schools.

There will be the opportunity for readers to choose the winner of the Chronicle Readers' Choice award from across all the categories.

As always we also have two special categories: Love Where You Live ­­- which recognises those who have made a special effort under the council-inspired community project ­­- and the Freeman Meacher Oldham Ambassador Award, for people who are promoting Oldham to the rest of the country and beyond.

An independent judging panel will assess all the nominations and draw up a shortlist of three finalists in each category.