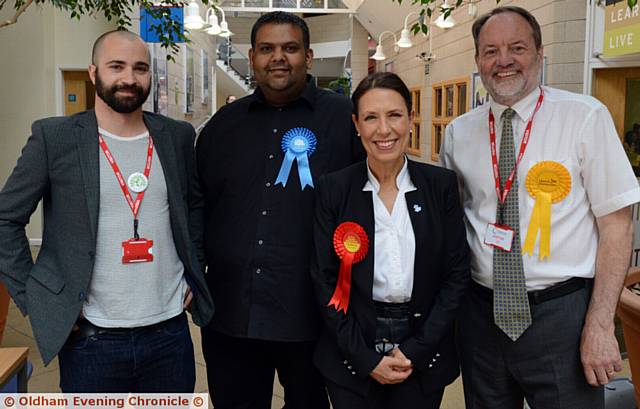 OLDHAM'S candidates for June 8's General Election were given the opportunity to address the borough's students and hear their concerns.

The Oldham East and Saddleworth candidates spoke to students at Oldham Sixth Form College on Monday.

At the start of the event, each of the candidates addressed the audience to speak about their views, before sitting down to answer questions. UKIP candidate Ian Bond was invited but was unable to attend. Labour candidate Debbie Abrahams said: "I'm privileged to have been your MP for several years. If re-elected, I will work with you, I will work for you and I will fight for a fairer Oldham East and Saddleworth."

Kashif Ali, a trained barrister, believes being the only candidate who was born and brought up locally makes him better placed to address local voters' concerns.

The Conservative candidate said: "My parents came to the UK in the Seventies. I know what it's like to be poor and at the bottom of the economic scale.

"I know about the importance of education and social mobility. Twenty years of Labour MPs and a Labour council have done nothing but let us down. Let's do something different. I will always be a voice for you guys."

Adam King is standing for the Green Party in Oldham West and Royton but was invited to speak as his party has not fielded a candidate in Oldham East and Saddleworth.

He talked about growing up in Chadderton and setting up his own hostel in Thailand. He said: "I have personally seen the barriers you will face over the next 10 years. I want to make those barriers go away for you. Brexit is going to define my life and your life. You should have a say."

Jonathan Smith, for the Lib-Dems, said: "This election is not about my generation. We are clear that 16 and 17-year-olds should be able to vote. Your vote to stay in the EU should be respected. Theresa May's hard Brexit strategy must be rejected. It will restrict the life changes you will have."

Jamila Rahman, who will turn 18 before the election, will be voting Labour. She said: "I think the Conservative candidate spoke to point score. When he was speaking I thought he has a point, but then he mentioned what Labour had done wrong."

At 17 Alice Cooper can't vote in this election but turned up to the event to learn more about politics.

She said: "My birthday is four days after the election ­- I'm devastated. I came here to get more clued up.

"The candidates gave their personal views, not necessarily those of their party. I loved it. I'm glad I came along."