You are Here: Home » News » Prescott hits out at Prime Minister

Prescott hits out at Prime Minister 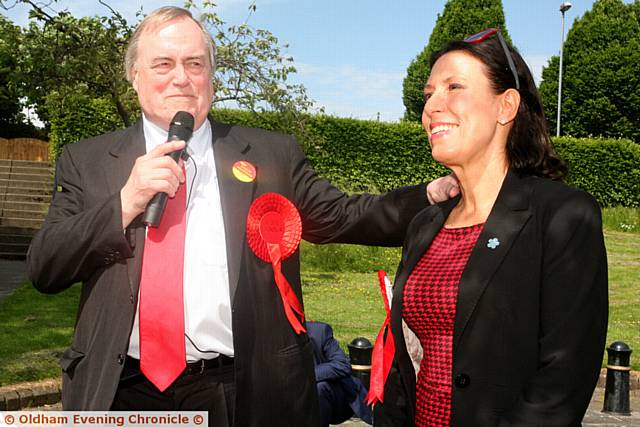 "STRONG and stable. We know where those words come from - Hitler first said them in Mein Kampf!"

So said Labour heavyweight John Prescott, deriding the slogan used constantly by the Tories in the current General Election campaign.

The former deputy prime minister made the remarks - which have previously been said by others - to Labour supporters on Saturday during a visit to Shaw. He was there to support Debbie Abrahams, who is defending the Oldham East and Saddleworth seat in the June 8 election, and to meet shoppers and business owners in High Street.

Mr Prescott said her predecessor Phil Woolas should not have been stripped of the seat by an election court which found he had lied about a rival.

He vowed: "We are going to correct that by having Debbie back again in parliament."

Mr Prescott, an MP from 1970 to 2010, was in lively form, joking with supporters, posing for selfies and even pulling out a toy fox, a reference to claims that the Tories want to bring back fox hunting.

He described Prime Minister Theresa May as "mean spirited", saying she believed in the few rather than the many - the opposite of Labour's campaign slogan.

Urging voters not to give her another four or five years in charge, he said she could not be trusted after changing her mind on issues such as fixed term parliaments, taxation and Brexit.

He also attacked her for cuts to the police and health services, plans for grammar schools and said she did not want to debate her policies.

He urged people to read Labour's manifesto which he said was fully costed and embodied the party's priorities and values.

On the mood towards Labour on the campaign trail, he said: "Going round the country, you can feel it's changing.

"There's something different - I feel the enthusiasm."

And there were cheers when he spoke of Labour leader Jeremy Corbyn, saying: "What's come out strongly time and time again is the man has honesty and integrity and the public see it.

"This is a man who says what he has always said."

Mrs Abrahams told supporters: "We need to send a clear message that enough is enough. We have borne the brunt of seven years of austerity and we want a fairer society. We want to stand together and build a fairer society in Oldham, Saddleworth and across the country.

"I am so proud of the policies we have developed. A real, clear alternative - that's what we will continue to deliver."