You are Here: Home » News » Maggie's oasis of calm and hope

Maggie's oasis of calm and hope 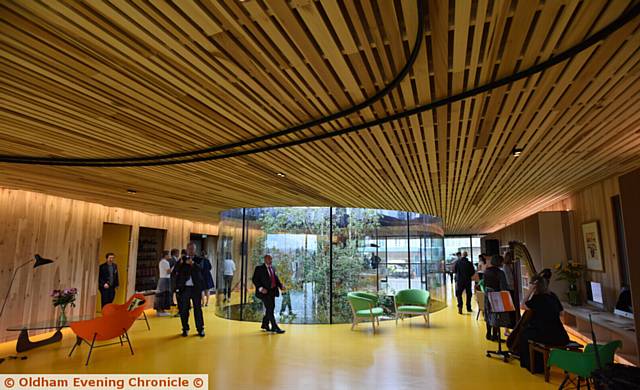 "AN oasis of calm" with "architecture of hope" was how guests described the new Maggie's Oldham Cancer Care Centre during the opening event.

Sir Norman Stoller said: "There are many things that we at The Stoller Charitable Trust are very proud of, but our involvement in Maggie's is a good example of the things that we are most proud of. I am humbled to see a Maggie's at The Royal Oldham Hospital become a reality.

"We are absolutely delighted to have helped to bring this centre to Oldham, where I started my business and spent my working life. As I personally have had cancer I recognise the real need for cancer support and it is pleasing to know that Oldhamers will now benefit from this centre as well."

Sir Norman also recognised the impressive construction and landscaping work which had gone into creating the centre.

The building was designed by acclaimed architects dRMM, a studio of international architects and designers, with each individual element designed to provide a calm, welcoming and uplifting environment for the people who visit and work in the centre.

For architect Alex de Rijke the creation of Maggie's Oldham was also a personal project.

Alex said: "I was, and still am, honoured to accept not just an interesting commission but one from an enlightened client.

"I was excited but I was unaware of the significance it would have on me not just professionally but personally as well."

He added that the timing of beginning work with Maggie's coincided with his own girlfriend Lucy Steed-Fassett being diagnosed with cancer.

"Her insights, positivity and dignity have been my inspiration for Maggie's Oldham," he said.

Speaking about the design of the building he said: "After spending time in hospitals it became clear to me that a Maggie's centre should not only offer support but it could also offer a new approach to healthcare design away from a typical hospital setting."

The centre, described as a "home full of surprises", hovers over a garden designed by dRMM with Rupert Muldoon, supported on very slender columns.

The garden offers open air rooms framed by pine and birch trees, with a reflecting pool of rainwater, while a central tree, named the "tree of life" by visitors on Friday, grows up through the centre of the building to bring nature into the interior.

Inside the intentionally simple timber box, visitors experience space, light and stunning views over Oldham and the Pennines beyond, with yellow floors and bright furniture bringing a smile to everyone who crosses the bridge to enter the centre.

The simultaneous need for privacy and collectivity is met with discreet meeting rooms and niches in the otherwise open plan interior space, planned around the central lightwell.

The materials are dRMM's characteristic engineered timber and glass and the outside reflects the presence and colours of the garden.

Maggie's centres are designed to feel more like a home than a hospital with the Oldham centre featuring a Maggie's staple - a kitchen table where people can gather around for a brew and a chat.

Every Maggie's centre follows the ideas about cancer care originally laid out by Maggie Keswick Jencks, who lived with advanced cancer for two years and was determined that people with cancer should not "lose the joy of living in the fear of dying".

Maggie believed people needed information, stress-reducing strategies, psychological support and the opportunity to meet other people in similar circumstances in a relaxed and domestic atmosphere.

She created a blueprint for her vision in the grounds of the Western General Hospital, where she was being treated, before she died in 1995, with her idea eventually becoming a reality in November, 1996.

Now, 21 years later, there are 21 centres across the UK and abroad, with more planned for the future.

Charles Jencks, Maggie's widow and co-founder of the charity, attended the opening of Maggie's Oldham and said: "I think this is a building full of the architecture of hope.

"As they say when you have grief, take your grief to nature, which has been very consiously framed in the centre, with the view over the Pennines and the tree of life coming through the centre.

"This shows why architecture really matters - it lifts your heart, it takes you to nature an it supports carers as much as patients."

Each centre is built within hospital grounds, giving patients and their families easy access to support when they need it.

Sir David Dalton, Chief Executive at The Pennine Acute Hospitals NHS Trust "It makes me really proud to see the magnificent new Maggies Oldham building standing in the grounds of The Royal Oldham Hospital, enhancing the services we offer.

"The building is not only architecturally stunning in design it is also a wonderful new haven for the people of Oldham and their families who are affected by cancer."

Maggie's Oldham will offer a way of living well with cancer and aims to make sure that people with cancer, as well as their family and friends, are really listened to and that they are offered tailored individual support, group support and practical advice.

All the support at every Maggie's centre is provided by qualified professionals within a space that enables visitors to meet other people who understand what it means to be living with cancer too.

It is anticipated that Maggie's Oldham will support approximately 10,000 visits every year, once the centre is fully established.

Maggie's relies on voluntary donations to support and grow its network of centres and to develop its unique, high quality programme of support, with each centre, including Oldham, having their own fundraising board to help support.

The centre thanked all of those who donated their valuable time, money and support to make the centre opening a reality including Sir Norman Stoller at The Stoller Charitable Foundation, The Royal Oldham Hospital, dRMM, Michael O'Hara, F Parkinson, Eric andMargaret Kinder Foundation, Rupert Muldoon of Potted and Planted for designing and planting the garden.

To plan your visit and get involved with fundraising visit www.maggiescentres.org/oldham