You are Here: Home » News » Discussions on future of town - post-Brexit

Discussions on future of town - post-Brexit 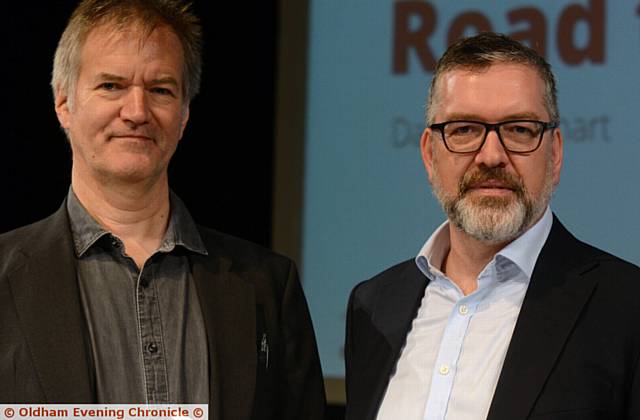 WHAT does the future hold for towns like Oldham post-Brexit?

What will the borough have to offer in terms of education and skills for both young and old?

Those were the pertinent issues raised at a discussion at The Grange Theatre in Oldham.

David Goodhart, head of the demography, immigration and integration unit at the think-tank Policy Exchange, visited the Oldham College venue to discuss his new book The Road To Somewhere.

His book looks into new global politics and populism,which has led to Donald Trump becoming president of the USA and Britain voting to leave the EU on June 23 last year.

In Oldham 61 per cent of people voted to leave the EU, making the town an ideal place for Mr Goodhart to discuss his book.

He said research shows people can be categorised in two groups ­- "Anywheres" and "Somewheres" - which can account for these global trends.

Mr Goodhart said: "It's good to be back in Oldham. It's good to be in a proper 'Leave' town in the North of England. The book is primarily about explaining the kind of political system that led to Brexit, and even Trump.

"You have the 'Anywheres', who are highly educated and mobile. They value openness and autonomy. They have relatively weak group attachment.

"But this group has grown rapidly in the last generation and accounts for 20 to 25 per cent of the population. It completely dominates the public realm and policy across the parties.

"The 'Somewheres' are half the population. They tend to be less well-educated and more attached to particular places. They value security and familiarity.

"Two groups sounds simplistic and binary, but if you read the book there are lights and shades. I have invented the names, but this is all in the data."

The discussion was chaired by Stephen Chalcraft, of law firm sponsor Shakespeare Martineau.

The panel admitted Britain is going through a period of unprecedented change - socially, culturally and economically - and spoke mostly about what role businesses and educational institutions can play in helping all groups of people get a good start in life.

Many believe higher and further education have become homogenised and not enough emphasis has been put on vocational and technical education.

Mr Goodhart also said Brexit could mean reducing the "bloated" financial sector, meaning it would need to focus more on home rather than the big cities abroad, and that the country could become less "London-centric".

The panel also said there need to be initiatives that would mean people do not necessarily have to leave their home town in order to feel they have succeeded in life.

Carolyn Wilkins said there were issues in the book that do resonate with the town. She said the town's image is not helped by having a single, external narrative, citing a recent article in a national newspaper which discussed the town's riots from 16 years ago.

She said: "Some policies and strategies have disadvantaged places like Oldham. Devolution should be about no one size fits all and the need to recognise the strengths and issues in different places.

"Being so close to Manchester city centre is an absolutely positive strength, but it shouldn't be at the expense to the growth of Oldham.

"We don't just want to be a dormitory town. There are opportunities here and we want that plurality. This is a collective endeavour and it needs the help of everyone."

Oldham College principal Alun Francis, one of the event's main organisers, said: "It was a pretty comprehensive debate. There were challenging questions about what places like Oldham need to do."