You are Here: Home » News » Classroom hero award is music to Sir's ears 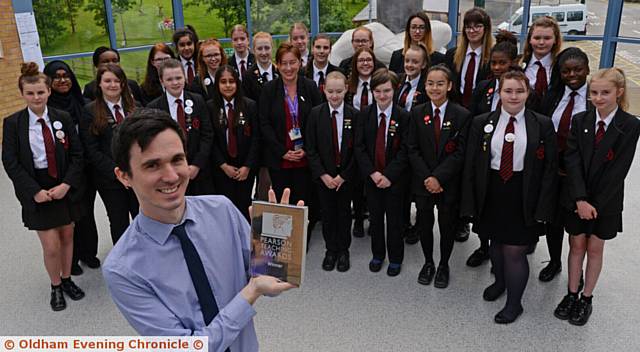 WINNER . . . Daniel Corrigan, head of music at Radclyffe School, with his Pearson Silver Award and the school choir

A TEACHING award is music to the ears of one member of staff at The Radclyffe School.

Daniel Corrigan, head of music at the school, is celebrating winning a Silver Teaching Award in the category Teacher of the Year in a Secondary School.

Selected from thousands of nominations, Mr Corrigan is one of only 56 winners who was celebrating on Thank A Teacher Day, which took place on June 16.

These educational heroes will receive their Silver Pearson Teaching Awards in schools and colleges across England, Ireland and Wales.

The awards are an annual celebration of exceptional teachers, created to recognise the life-changing impact an inspirational teacher can have on the young people they teach.

Mr Corrigan, who is in his third year of teaching at the Chadderton school, was presented with the award after a performance from the school choir.

He said: "I was shocked, surprised and a little bit overwhelmed when I found out about this award. At the end of the day it's what the students do that's the most important thing.

"This is an absolutely brilliant school, it's so supportive of music and the arts, the head teacher in particular ­- the sky's the limit."

Mr Corrigan will join other Silver Award winners at the UK final of the Pearson Teaching Awards, a glittering ceremony in London on October 22, when they will find out which of them has won one of 11 Gold Plato Awards, the UK's Oscars for Teachers.

This ceremony, entitled Britain's Classroom Heroes, is filmed and broadcast by the BBC as a showcase of excellence in education.

Alison Taylor, the school's head of the sports and performing arts faculty, said: "We are absolutely delighted Daniel has been recognised with this award. He has made a huge impact not only to the music department but also to wider aspects of our school life.

"He is an outstanding practitioner, who commits himself absolutely to ensuring that music is at the heart of our school community.

"He is a truly amazing teacher, and we are fortunate to have such a passionate, inspirational and hard-working teacher."