You are Here: Home » News » Civil war rages in the park

Civil war rages in the park 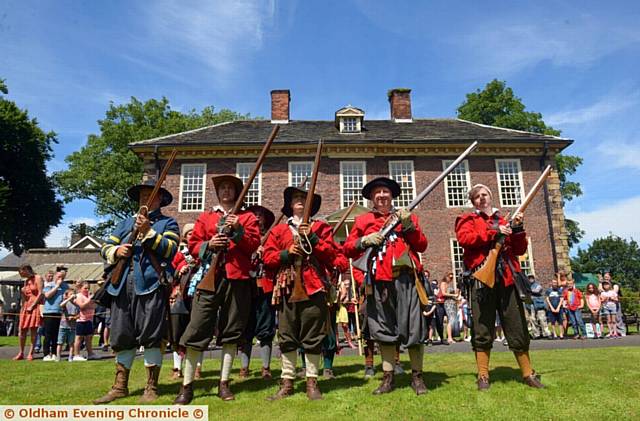 THE sound of gun shots, sword fights and soldiers marching to the beat of battle drums brought the English Civil War to life in Chadderton at the weekend.

More than 400 visitors descended on Foxdenton Park to watch a re-enactment of a 1642 battle which was central to the town's history.

The sun was shining for the annual Chadderton Day event organised by Chadderton Together in aid of the Save Foxdenton Hall campaign.

Visitors met soldiers of the Earl of Manchester's Regiment, witnessed a battle between Royalists and Parliamentarians and heard about Foxdenton Hall's history as well as the ongoing efforts to restore it.

The Rev John Simmons, Chadderton Together chairman, said: "We are delighted the Hall could be central to Chadderton Day because it is part of our heritage.

"It's important to look back to the 17th century to give the community a sense of the building's history. We want to restore it to its former glory and see it used by the community so it becomes somewhere we are proud of."

Cllr Colin McLaren, who is a trustee and Chadderton Together vice-chairman, said: "We were delighted to see so many people turn out.

"We hope the event has raised the profile of our campaign to renovate Foxdenton Hall and helped gain residents' support.

"The hall is an iconic building and we do not wish to see it fall into disrepair."

Chadderton Historical Society and Firwood and District Residents' Association supported the event, while several food, event and craft stalls were set up across the park.

Dozens of pikemen, musketeers and drummers from national charity the Sealed Knot proceeded through the hall grounds throughout the weekend.

Visitors John (78) and Christine Graham (71), from Bury, said: "It is very impressive. We are glad we travelled across for the day. The event is well organised and it is nice weather to be out in."

Failsworth resident Kelly Nulty said: "We wanted to come and see what was going on. It is interesting."

At 2pm, a sea of men wearing traditional red uniform engaged in close combat with Parliamentarians attempting to attack the hall and Royalists defending it.

Soldier David Rowlinson (25) said: "We acted out a skirmish in battle.

"As we ran into battle from over the hill we portrayed the first section of the war, the War in Lancashire, which is reflective of what the war was like throughout the country."

Musketeers were seen drawing on their supplies from bandoliers, single measures of gunpowder, hung around their necks.

Onlookers were taken back to the 17th century with the smell of smoke and beating of the drum to signal actions to the soldiers over the noise of battle.

Laura Fleming (25), from Chadderton, said: "I have loved it. It's great for my son to get to know about the history. The battle was brilliant."

Foxdenton Hall was rebuilt by William Radcliffe in 1620, but he died with his son Robert at the Battle of Edgehill in 1642, at the start of the war.

Mr Molcher, who led the Royalists, said: "It is an honour to be here as Lord Radcliffe and a privilege to be invited to Chadderton to bring some of their history back to life."

Councillor Iqbal said: "I'm really impressed with the event, with the costumes and the amount of detail they have gone into. I should have taken time out to do some background studying."