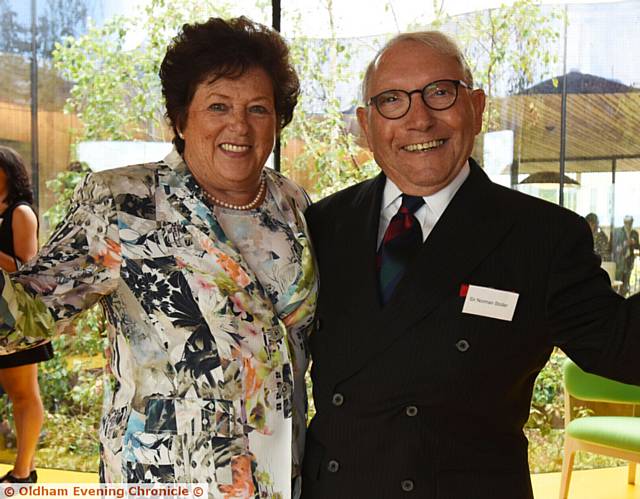 A DEDICATED fundraiser said she was "overwhelmed" when she heard about the latest donor to her campaign for Maggie's Oldham cancer care centre.

Mum-of-two Sharon Livesey was shocked when a donation for over £1,300 was delivered to her from Sir Norman Stoller, the man whose name appears on the centre itself.

Sir Norman, who funded the centre through The Stoller Charitable Trust, read about Sharon's latest fundraising challenge in the Oldham Chronicle and knew he had to support her.

Sharon (38) completed a gruelling Ironman UK race in Bolton in July, which involved a 2.4mile swim in Pennington Flash, a 112-mile bike ride and a full 26.2 marathon.

Despite getting not one but two punctures, Sharon, from Derker, completed the challenge in just 13 hours, 42 minutes.

The challenge was just the latest in a string of events Sharon has completed in aid of Maggie's Oldham over the past two years, including completing marathons, triathlon, open water swims and a Ironman 70.3 in Australia.

Sir Norman, who donated £1,342 to her fundraising appeal, one pound for every minute she has spent supporting Maggie's this year, said: "I read her story in the Oldham Chronicle and I think it is a fantastic achievement.

"Her enterprising and fundraising activities on behalf of the charity deserve a boost.

"I am happy to support her efforts and thank her on behalf of Maggie's Oldham."

The donation means Sharon has raised over £5,000 for the centre over the past two years, with more challenges still to come over the year.

Sharon, who owns Mario Hair Design on King Square Shopping Centre, Oldham, said: "I am overwhelmed by the donation from Sir Norman.

"It has been a crazy few weeks since the event and I've had a lot of support which has been great.

"I never thought I would be able to raise so much for the charity."

Sharon, who is also on the fundraising team for Maggie's Oldham, is already preparing for her next challenge, an open water swim across Coniston later this month and her efforts have earned her a nomination in this year's Pride in Oldham awards.