You are Here: Home » News » Trek on Great Wall for Maggie's centre 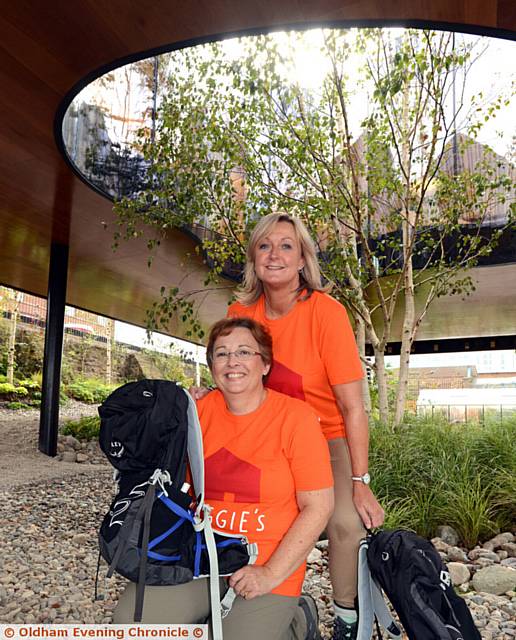 TWO mums are preparing for the adventure of a lifetime as they get ready to trek more than 50 miles along an un-restored section of the Great Wall of China.

Jane Beswick and Sue O'Brien are taking on the huge challenge in support of Maggie's Oldham and Manchester, as both have experienced how difficult cancer can be for patients and carers.

Jane, from Grotton, was diagnosed with breast cancer in July 2013 and underwent surgery, chemotherapy and radiotherapy as she battled the disease.

The mum of two said: "I was devastated. I had no family history of it, I just found a lump.

"The quality of care and treatment I received was fantastic. It was tough but it saved my life.

"You are never given the all-clear and continuing with monitoring appointments after treatment ends, but you have to be positive about the future.

"I knew that if Maggie's had been here when I was going through treatment I would definitely have used it."

Jane began volunteering at the Maggie's Manchester when the centre, on Kinnaird Road, opened last year and she met fellow volunteer Sue.

Sue, from Heaton Mersey, was inspired to help the charity after being a cancer carer several times for family and friends, including her mum and best friend, and discovering a hereditary link to the BRCA mutant cancer gene.

Sue, a mother-of-four, quickly struck up a friendship with Jane and the pair began discussing their desire for adventure.

Jane (51) said: "I had always wanted to trek the Great Wall of China and had originally thought about doing it to celebrate my 50th, but I wasn't well enough.

"I told Sue about it and as we both have children travelling and doing exciting things we thought 'why should they get all the fun?' We wanted our own adventure and challenge."

The pair will join with a team of other trekkers with Discover Adventure for the eight day challenge in October.

After flying out to Beijing, Sue and Jane will walk for up to 10 hours a day over uneven terrain, through forests and farmland and climbing undeveloped parts of the wall.

They will spend their nights in local villages with only very basic amenities along the journey.

Sue (53): "We are not sure what to expect really. I've watched videos with people explaining the trek and saying that it was harder than they had anticipated.

"I'm sure a lot of people in our group will be doing it for their own reasons for taking part in the trek, personal or fundraising, so it could be quite emotional at times.

"But we are looking forward to it and think we will probably have lifelong friends at the end."

For Jane the walk will be particularly poignant as cancer treatment left her severely weak and struggling to walk more than a few steps at a time.

She said: "Chemotherapy really hit me hard. There were days when I couldn't get out of bed and walking a few steps was a challenge, so to be walking for miles at a time is something I never thought I'd be able to do."

At the end of their challenge the pair will be able to enjoy well-earned holidays with their husbands around China.

Jane said: "Maggie's means so much to both of us and we have seen how much it can mean to people."

She added that the variety of support that Maggie's can provide, including advice about treatment, relaxation classes, benefits advice and the chance to chat to a psychologist is what makes Maggie's so special.

The pair have self-funded their travel costs. They have already raised £12,000 though a variety of events.