You are Here: Home » News » Austin’s heroics revealed on TV 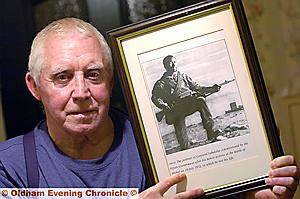 A FORMER SAS soldier from Oldham who helped make military history has spoken of his battle in a television docudrama.

Entitled “Last Stand in Oman”, the former Royal Engineer and four colleagues told of the Battle of Mirbat in July, 1972.

The soldiers had been sent to Oman to assist the Omani government fighting against Communist guerillas in the Dhofar region.

During the six-hour battle, nine SAS members fought and repelled more than 250 Adoo guerillas attempting to take the village.

Mr Hussey, who joined the SAS aged 22 in 1963, said: “Their intelligence decided to take the town that specific day and we were there.

“It was a real battle, we were attacked with our backs to the sea and couldn’t go anywhere, so we fought and we won.

“There was just nine of us, they didn’t expect the retaliation from us.

“They suffered a lot of casualties, I think their intelligence was flawed.

“It was a bad day for us, we lost two soldiers and one person from the Dhofar force who was helping us.”

As an SAS soldier, Mr Hussey fought in conflicts across the world including Yemen and Borneo.

Mr Hussey, who returned to Oldham and became a hod carrier, admits his 10 years as an SAS soldier was the most wonderful time of his life.

Despite the battle becoming part of SAS history, Mr Hussey said he almost did not take part in the docudrama.

He said: “They’ve been trying to dig into this part of military history for ages but no one would speak out because you didn’t talk about the battles.

“Initially, I said I wouldn’t have anything to do with it but as my former colleagues were talking, I agreed.

“The programme was correct and very well done, but I was so embarrassed watching it.

“Something like that is with you every day of your life.

“There is an element of pride watching it but it belongs to the regiment and your loved ones.”