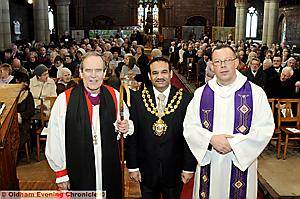 WE all stand together (from left) Bishop Nigel McCulloch; Mayor of Oldham, Councillor Shoab Akhtar; and the Rev David Penny, vicar of St Luke’s

A CHURCH which had its origins in a reeling room above a row of cottages in Chadderton held an emotional final service yesterday.

Around 200 well-wishers packed St Luke’s in Queens Road as the Bishop of Manchester, the Right Rev Nigel McCulloch, officiated and made the church part of his “Run the Race” relay.

The Bishop walked into the church carrying the baton from the 2002 Manchester Commonwealth Games which he is taking around every parish in his diocese.

And he told churchgoers at the Advent Sunday service that people came to Jesus, not to a building, but to a man.

Although it was devastating to close after 120 years, the Bishop said it was a brave decision.

The church is now redundant, but has become part of a joint parish with St Matthew’s in Chadderton Hall Road.

It will also continue having services in the near-by St Luke’s Primary School in the New Year.

St Luke’s was built almost 120 years ago, but owes its beginnings to Stockbrook Sunday School, which began in a cottage, then a reeling room above a row of cottages, in Stockbrook in 1818.

The building was badly damaged by fire in 1954, however the congregation recovered and made sure it was repaired and reopened.

But the church, Chadderton’s largest which can hold 500 worshippers, has now seen congregations dwindle to an average of only 25-30.

The merger follows a decision by the Manchester Diocese to encourage deaneries to look at how churches can work together when there are too many in one area.

The vicar, the Rev David Penny, said the building now reverts to the diocese and will be sold for an appropriate use in the New Year.

He added: “Services will be held at St Matthew’s up to Christmas, but in January we are going to take a new form of ministry at the school.

“We are going to ask the community how they want to worship — then let it grow into something really new and exciting.

“It is wonderful to see so many people here, including former members of the clergy.”