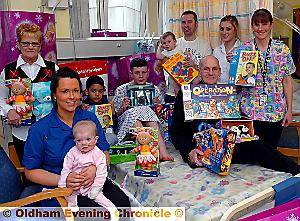 The class of around 25 seven-year-olds at Blackshaw Lane Primary School, Royton, were distraught after the substitute teacher informed them that it was mums and dads who leave out presents on Christmas Day.

Parents have complained about the incident and were sent a letter by the school saying the teacher has been disciplined over the gaffe.

One dad told the Evening Chronicle: “My son came home and said that his substitute teacher had told the class that Santa doesn’t exist and it’s your mum and dad that put out presents for them.

“Apparently, they were all talking about Christmas and being a bit rowdy. She just came straight out with it.

“He was nearly in tears — and so close to Christmas. I thought it was wrong.

“He was distraught about it. He’s only seven-years-old and it’s part of the magic of Christmas to him.

“We told him that she did not believe in Father Christmas because of her religion and he’s fine now.

“I found it shocking. She has done it maliciously.

“A lot of parents were disgusted and complained to the school. If she was a regular teacher then I think a lot more would have been done.”

Headteacher Angela McCormick refused to comment on the incident.

Oldham Council’s service director for children, young people and families, Janet Doherty, said: “This is a matter for the individual school to resolve.

“We have every confidence that the head will deal with it sensitively and appropriately.”

The former security officer (69) who scooped £4.2 million five years ago in Oldham’s biggest ever single lottery win, delivered sacks of presents when he visited the youngsters’ ward.

Tommy said: “I’ve done this for the last few years.

“I have grandchildren of my own and wouldn’t like to see them in hospital on Christmas Day.”