You are Here: Home » News » Premier cast in key role on BBC show 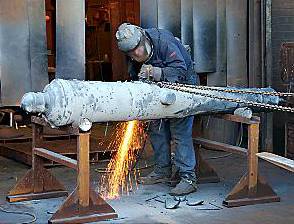 A worker at Premier Castings grinds the newly-cast cannon

AN Oldham firm has played a starring role in bringing back to life a piece of Britain’s maritime history.

Managing director David Lees and his team at Premier Castings at the Old Road Foundry were called in by conservation experts working on the TV programme “Queen Elizabeth’s Lost Guns”, which follows the rescue and reconstruction of a 400-year-old cannon from an English shipwreck.

The wreck lies a mile off the coast of Alderney, in the Channel Islands, and it could rewrite English naval history.

The programme’s presenter, Saul David, joined a team of divers and experts to help find and raise the ship’s cannons. And by recasting and firing them, it is hoped to demonstrate how Queen Elizabeth I became the mother of British naval dominance.

Patents made from the restored cannon were taken to Premier Castings for moulds to be cast. The firm has previous experience in the field, having cast live-fire cannon for re-enactment societies.

These moulds were then used to create an exact, working replica of the cannon that would fire on a Ministry of Defence range in Wells, near Bristol.

Mr Lees said that because the aim was to fire the cannon, the accuracy of the moulds was paramount.

This was reiterated by Mike Corfield, director of conservation for the Alderney Maritime Trust, who has been overseeing the restoration. He said: “Premier put in the core, which represents the bore of the gun, and that had to be exactly in the centre, with no kinks.

“If the core wasn’t dead in the middle, the cannon would fire off-centre and alter the whole characteristics of the gun.”

Although at a length of 9ft this was the largest cannon Premier has ever cast, the team at the Old Road Foundry proved themselves experts in the field.

While the principle for casting the cannon is the same as it would have been all those centuries ago, the technology involved is now very different.

Mr Corfield added: “Back in the 16th century the gun would have been cast vertically in a pit, but the end product is the same.”

The furnace which holds the molten pig iron, which is made from a base of scrap including car brake discs and carbon, isn’t heated by charcoal and stoked by water-powered bellows, as it would have been centuries ago, now it uses an electromagnetic field to raise the temperature, similar to a microwave oven.

Although modernised, the process of bringing the pig iron up to the correct temperature to be poured into the moulds cannot be rushed.

Mr Lees said: “If we try and force the process there are problems. It takes as long as it takes . . . it’s still nature’s way.”

And so, under the watchful eye of excavation leader Mensun Bound and Nick Hall from the Royal Armouries, the pig iron was poured into the moulds.

All the team waited with bated breath for the cannon to cool down and be removed from the casing.

And on Saturday (“Timewatch”, BBC2 8pm) when the cannon is fired on television, the nation will see how successful the operation has been thanks to an Oldham company.