You are Here: Home » News » That winning feeling 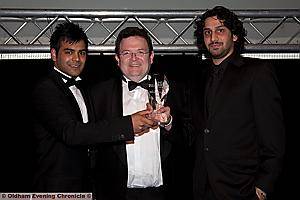 BUSINESSES big and small were recognised for their immense contribution to Oldham’s working life as the eight inaugural One Oldham award winners took to the stage.

They began with a man who made a successful career from the football pitch to a business pitch.

David (30), who is originally from Newcastle and was presented with the crystal trophy by college vice-principal Michael Walsh, said: “I was very surprised to be shortlisted and even more surprised to win.

“Oldham has always been very good to me.

“I must thank Ian Dunkerley and Business Link which gave me a very good start and showed me what we were doing was competitive.”

David is now firmly established locally — he employs five people, his fiancee is from Failsworth and he lives in Saddleworth.

Start-up business winners, partners Anjub Ali and and Sul Mirza, of Mirzali Architecture LLP, were blown away by their award which was sponsored by Innovative Technology Ltd and presented by Aiden Towey.

Anjub (25) is from Oldham and went to Grange School then studied at Manchester College of Architecture where he met Sul (27) from Bury.

Anjub said: “This a fantastic event, something very different and unique, a proper awards show. We were shocked and didn’t expect to win.

“I saw an opportunity in Oldham and asked Sul to help out, and it has paid off.

“We are able to communicate with ethnic minority people in their own languages.”

Sul added: “Oldham is an enterprise town. There is something happening every day, something is being set up and it is very vibrant.”

Larger-than-life engineer Frank Rothwell burst into song when his Another Level car parks company won the Innovation and Design award — then he took advantage of a Government minister in the audience to plead for more Government help for business.

He also revealed that he is the new business face joining the Chronicle’s £100,000 appeal for the new Christie radiography unit at the Royal Oldham Hospital and told the audience he would give them plenty of opportunities to help out.

Frank was joined by his wife Judith to be presented with his award, sponsored by BAE Systems, and afterwards said: “This is a family business, a partnership, and we still enjoy a challenge. We have been in business 30 years and this is a 40th year of marriage.

“This event is so good for its first year and it will get even better, going from strength to strength.”

Martin Littler’s key role in providing top-class technology for people with special needs was celebrated as he was named Oldham Businessman of the year.

Oldham is a leading provider of technologies for people with special needs and Martin, who helped to found Inclusive Technology in Delph, has played no small part in that.

He said: “I feel thrilled with my win. I think that we have built up a successful business because the three of us who founded Inclusive Technology had all been special needs teachers, so we not only understood our market, we were our market.”

Sheer determination to bounce back from adversity put Mountainfeet on the right footing for the top spot in the retailer of the year category.

Some would say that a business’s mettle is only truly tested when it hits adversity and owner Simon Taylor, along with his team, have more than proved themselves capable.

He said: “I’m absolutely elated with this award. It’s a recognition that our business is on the right track.

“Two years ago, we were on the verge of going bust, but we reinvented the shop and by doing that we carved a niche in our particular business.”

Pure passion for horticulture paid off for Barbara Jackson, of Millers Florists, who flew the flag for the women by being crowned Oldham Businesswoman of the year.

“I’m absolutely shocked and still coming back down to Earth,” said Barbara.

It was third time lucky for leading women’s underwear specialists Frillys, who were named small business of the year and co-owners Julie Ashworth and Annette Simpson couldn’t hide their delight.

The popular store has already been nominated twice for top industry awards, but has always missed out on the top spot — but all that changed.

Julie said: “It feels fantastic to pick up this award, it’s absolutely amazing. We really didn’t think we were going to get it.

“Sometimes you get up in the morning and wonder whether it’s all worthwhile, because conditions in retail are very tough at the moment, but recognition like this makes it all worthwhile.”

The ceremony saved the best till last for the Business of the Year award which went to Mike Braddock, the CEO of Secure Options Ltd of Royton, who beat off the giants of JD Williams and Widdop Bingham, with the company he started from his kitchen table.

Modest and a man of few words he said: “It’s great to be the first recipient.

“We employ 190 people in Chadderton, Royton and Rochdale who obviously will be very pleased. Our customers are all over the UK .

“We kicked off as a one man show 20 years ago, and I’m just really pleased to get some recognition locally.”

He was presented with the crystal trophy by David Meredith, of sponsors Royal Bank of Scotland — who broke his right arm just before the event — who said: “It is an absolutely brilliant night and with a great atmosphere.

“When we started talking about this 12 months ago I didn’t expect to achieve it on the scale we have seen tonight and all the sponsors we have had despite the credit crunch.

“It shows Oldham has faith in its future.”

The generosity of guests at the awards raised £2,200 for Dr Kershaw's Hospice with a table raffle.

They also raised money for the teenagers at New Bridge Post 16 School in Fitton Hill who created table decorations by planting seeds, decorating plant pots and adding their own artistic touches, which were bought by guests to raise funds for the special school.