You are Here: Home » News » Living in fear 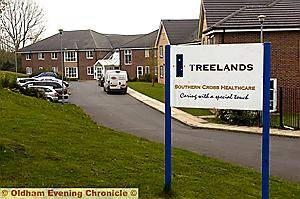 A DAMNING catalogue of abuse and neglect claims have been made against an Oldham care home by angry and upset families.

Relatives whose loved ones were at Treelands, in Wester Hill Road, Fitton Hill, have made a string of claims against the home.

::Lack of care causing residents to catch illnesses such as scabies.

::Claims of bad attitude from staff and management.

Families contacted the Chronicle after Linda Woolley raised concerns about care given to her 84-year-old mother Alice Woolley while at Treelands. She claimed Alice, who suffers from dementia, was left in urine-soaked clothes. Now, four other families have come forward to speak out against treatment their relatives received at the home.

Tom and Marilyn Byrnes, of Irwell Walk, Hollinwood, claim Marilyn’s father John Burgess (92) was found soaked in urine and faeces on a number of occasions. They say he lost weight because there was not enough staff to feed him. Mrs Byrnes added: “We never complained officially because mum was too afraid to. It’s the fear of there being nowhere else to go. Mum was afraid he would come home and she would not being able to manage.”

Paul Smith claimed staff failed to diagnose that his father Michael Smith (60) had scabies for more than two years.

He said his father, who was diabetic, was found to have white and green fungus on his feet. His £400 gold necklace went missing.

Mr Smith said he never formally complained at the time because he was told staff were dealing with issues.

“Thinking about the way he has been treated makes my blood boil,” he added.

Tina Hardman, of Watts Street, Hollins, claimed staff failed to inform her when her father Alan Hardman (81) was taken ill. Staff wrongly claimed he had been taken off medication. His false teeth, glasses and an expensive designer shirt went missing, said Tina.

Southern Cross, the company which runs the home, wrote to her in January, 2008, to arrange a meeting to discuss her concerns but she was too upset to do so following his death in February.

She said: “I’m very unhappy about how my father’s situation was managed.”

Jean Pinder, of Chelsea Close, Shaw, claimed her father Ernie Melia (85) had a catheter installed despite staff having no training. She said her father contracted scabies while at the home and said staff were not following basic hygiene.

The inquiry has been resolved but Mrs Pinder said she has not been told of the outcome.

Independent inspectors, the Care Quality Commission (CQC), formerly the Commission for Social Care Inspection (CSCI), made an unannounced inspection at the home in June, 2008.

Their report rated the care home at two stars, which means the people who use the service “experienced good-quality outcomes.”

No requirements were made, but the home was asked to individually obtain receipts for people’s expenditure, and gaps in staff working history should be recorded for future reference.

A spokesman for CQC said: “We are aware of some issues around this home and we are keeping a very close eye on it.

“We are making sure we are being kept informed by management and by Southern Cross.

“As part of that, we may well do another random inspection of the home around areas that have come to our concern.”

Michael Meacher, Oldham West and Royton MP, said: “I’m very alarmed at these allegations which, if true, are extremely serious.”

Mr Meacher said he would be seeking assurances that the council has taken all necessary measures to protect residents there and he would be pursuing the matter.

A spokesman for Southern Cross said: “We encourage that any concerns are brought to our attention at the earliest opportunity to enable us to promptly review and address any issues.

“Concerns in some of the cases were not brought to our attention and therefore we have been unable to address the claims directly.

“We take any issues raised very seriously and are always happy to meet with individual families or residents to address any concerns.

“The quality care of residents at the home is our first priority.”

Councillor Brian Lord, Cabinet member for adult services and health, said: “Following the initial complaints, we moved quickly to investigate. We are now in regular contact with the owners of the home.”