You are Here: Home » News » Six-hour aerobathon boost for children 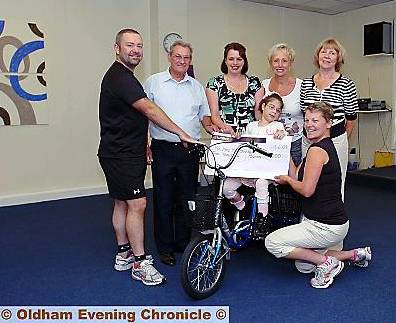 GENEROUS keep fit fans headed to the gym and helped raise funds for two youngsters with a rare condition.

Active adults took part in an aerobathon to buy a specially-adapted tricycle for Cordelia Cowsill (7) and her brother, Oliver (10).

The siblings both suffer from tuberous sclerosis (TS), a condition which riddles the organs with tumours.

The sponsored event, held between 9am and 3pm, raised £550 for the tricycle.

As an added surprise, a personal donation of £1,000 was given by Oldham Evening Chronicle reader Kathleen Clegg to parents Amanda and Martyn Cowsill.

Gill Bussy, fundraising co-ordinator, said: “We held an aerobathon last year and decided to do it again to help get the tricycle for the youngsters, who are gorgeous children.

“It was after reading about them in the Oldham Chronicle that Kathleen came forward and donated the money for respite care for their parents.

“We didn’t tell Amanda and Martyn about the cheque until the presentation day and Amanda was in tears.

“A thank-you goes to everyone who donated and helped us out.”