You are Here: Home » News » High-flying role in aerospace history 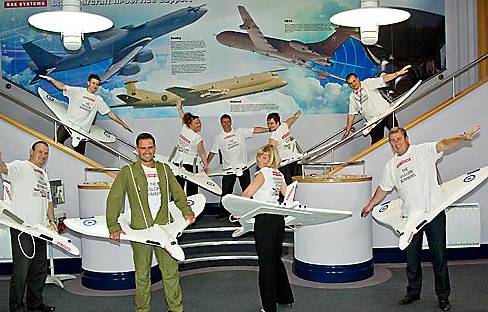 HISTORY will record that Chadderton was, in its heyday, one of the most successful and prolific sites in the British aerospace industry.

And if people make places, then the thousands of workers who have shared the success of the Chadderton manufacturing site at Greengate for 70 years will go into folklore.

The number of people employed at Chadderton peaked during the war years at 11,267, so you can imagine the many and varied characters who spent time in the vast factory.

Created in 1939 by Roy Dobson, later to be knighted, the Greengate factory took over manufacturing the famous AVRO aircraft from Newton Heath.

Sceptics were quick to write off the project as a white elephant, asking “Where will all the orders come for such a site?”

Undeterred, Dobson called for his chief construction engineer John Green and told him: “Take the size of a normal aircraft factory and make it twice as big.” And he did.

The first aircraft moved into Chadderton from the AVRO works at Ten Acre Lane, Newton Heath, were Bristol Blenheims. Avro Ansons were also produced, but the future of the factory was pinned on the success of the AVRO Manchester bomber, which failed to live up to expectations.

Powered by the insufficiently developed Rolls-Royce Vulture engine, more were lost through engine problems than to enemy action.

Out of this failure, however, came the greatest bomber of the Second World War — the AVRO Lancaster.

By the end of 1943 — in one million square feet of floorspace — 150 Lancasters were being produced every month.

As an economy measure, the government announced in 1957 the end of manned bomber aircraft in the Royal Air Force and AVRO entered the civil aviation market.

While two prototype aircraft were being developed, a series of devastating fires ripped through the Chadderton factory in 1959 and 1960, destroying a priceless collection of 47,000 design and publicity negatives

A prototype Avro 748 44-seater civil aircraft was also damaged, but nearly 30 years later the aircraft — call sign G-ARAY — was still flying, a true testament to the skill and ingenuity of the Chadderton workforce.

The site went on to build and sell 380 748s to more than 50 countries around the world.

The decade also saw the sprawling business — loosely known as Hawker Siddeley Group — merge to operate as one company, leading to world-famous names like Avro, Armstrong-Whitworth, de Havilland, Folland, Gloster and Hawker, that previously operating as a combine, disappearing.

While heavily engaged in the production of civil aircraft in the 1960s, Chadderton also commenced the manufacture of wing components for the Airbus.

The three major European aircraft manufacturers, Hawker Siddeley Aviation, Sud-Aviation (France) and Deutsche Airbus (Germany), combined to design a wide-bodied airliner, which was to become the A300.

Hawker Siddeley Aviation was the only UK manufacturer to join the programme and developed and constructed the wing. Airbus Industries was not to be officially created until 1970.

The 1960s also saw the delivery of the last of the 136 Vulcan bombers, all of which were built at Chadderton between 1952 and 1964, and a new military aircraft emerged from the design office, the HS 801, which went on to become the Nimrod.

This decade also saw the first inklings of the merger between the British Aircraft Corporation, the UK’s other major aviation company, and Hawker Siddeley, although it was another 10 years before this happened.

It was on April 27, 1977, that British Aerospace became a reality. Two years later, Chadderton began producing the rear fuselage for the BAE 146 regional airliner and in March, 1984, the Advanced Turboprop — the 64-seat ATP — was given the go-ahead

In the late 1990s, Chadderton became part of the Military Aircraft and Aerostructures division of British Aerospace, and initiated Project Quasar, a programme to decommission the south-east end of the Greengate site and re-focus the remaining manufacturing activities.

This ultimately led to the establishment of a spares, repairs and modification business, alongside the Nimrod wing work.

It was in November, 1999, that British Aerospace and Marconi Electronic Systems merged to create BAE Systems. This co-incided with business growing at the Chadderton site, with the spares and repairs business taking on the Tornado update programmes from Salmesbury and later also supporting Harrier, Jaguar, Nimrod, Canberra and VC10 aircraft.

Post 9/11, saw a downturn in aircraft sales and in February, 2005 ,the decision was taken to end manufacturing at Chadderton — ending 65 years of aircraft production at Greengate.

But Chadderton lives on . . . and is now part of Large Aircraft In-Service Support within the Military Air Solutions division, developing new strategies for the next generation of customer products and services.