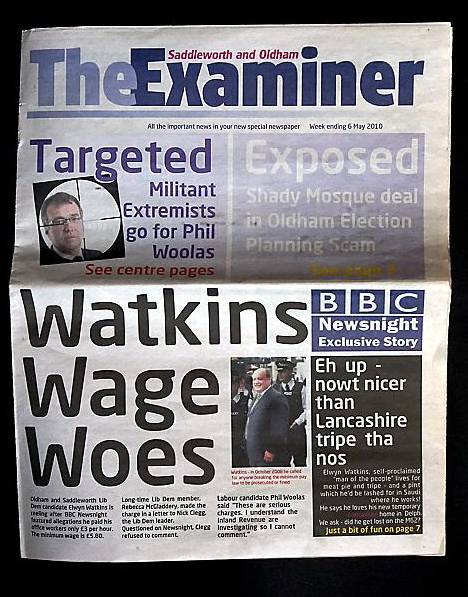 A copy of the Examiner at the heart of the row

LABOUR MP Phil Woolas could be jailed and disbarred from public office if legal action against him succeeds, leading to a by-election.

As revealed by the Chronicle on Friday, Lib-Dem candidate Elwyn Watkins claims the Oldham East and Saddleworth MP made false statements against him that affected the general election and wants the constituency result declared void.

He has submitted a petition for a hearing of a rarely-convened election court, based on an alleged breach of Section 106 of the Representation of the People Act.

It could result in history being made in Oldham as the law has not been used for 100 years — the last case was in Ireland in 1911.

The law states that people found guilty can be imprisoned and/or fined, disbarred from public office for three or five years and the election result deemed void, although legal sources played down the jail threat, saying it was an unlikely outcome if Mr Woolas and his agent were found guilty.

The petition also calls for a report to be written stating who has been found guilty and that they pay the costs. Two High Court judges and the Official Recorder of the House of Commons are now expected to travel to Oldham within the next couple of months.

The case could be heard at Oldham Civic Centre. They will hear evidence over three to four days and will then conclude whether they find in favour of the petition or not.

If he loses then it would be the end of Mr Woolas’s political career and candidates could put themselves forward for a by-election. If Mr Watkins’ legal bid fails, the Chronicle understands he is likely to give up on politics.

The election was nail-bitingly close, with Mr Woolas beating his Lib-Dem rival by 103 votes after a second recount.

Rules governing the conduct of election candidates and campaigns state that anyone publishing a false statement of fact about a candidate’s character or conduct is guilty of an illegal practice unless he can show he had reasonable grounds for believing the statement to be true.

Mr Watkins is furious with Labour campaign literature, published apparently with Mr Woolas’s consent by his agent Joe Fitzpatrick, and says it breaches this provision.

He claims the one-off “Examiner” newspaper, an edition of the “Labour Rose”, and a full-colour “Election Communication” leaflet, contained numerous misleading and erroneous claims about himself and his campaign.

He said: “Although much of the material in these leaflets was misleading or in error, my case will focus on three particular areas: the claim that I do not live in the constituency, the stories about me ‘wooing’ Muslim extremists and the back page newspaper article regarding the financing of my campaign.

“It is my intention, therefore, to petition for an election court to consider the material and the false claims within, against the record of press statements, personal appearances, miscellaneous correspondence from Government agencies and election expense returns, and to seek appropriate redress in accordance with the provisions of the act.”

Mr Woolas, the former Immigration Minister, has dismissed the action as “sour grapes” and his opponent as “a bad loser.”