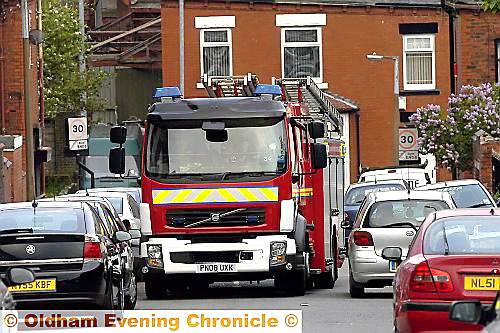 NO way through . . . double-parking is causing huge problems for firefighters like this one in Coppice

FRUSTRATED firefighters are being prevented from reaching potentially deadly fires because of inconsiderate parking.

Vital minutes tick by as emergency crews are forced to look for alternative routes or bang on house doors to ask drivers to move their vehicles.

Double parking is creating a huge problem for emergency services in Werneth, Coppice, Glodwick and Westwood.

Brigades have now resorted to carrying round notices to leave on car windscreens asking the owners to park them responsibly.

Watch commander Peter Shaw from Hollins fire station hit out at thoughtless motorists after an E-Class Mercedes in Norfolk Street, Werneth, was destroyed by arsonists.

He was part of a crew called out in the early hours one Sunday morning which were forced to take a detour.

The fear is a house fire could have fatal consequences if firefighters are blocked in their efforts to get there simply because of selfish parking.

He said: “A fire engine is a big vehicle and people who double park or who park on corners don’t leave enough room for us to get through or manoeuvre.

“They have absolutely no concern for fire appliances, but they would be the first to complain if their house was on fire and we were delayed getting there.”

Streets constructed in Victorian and Edwardian times were not built wide enough to cope with today’s level of traffic.

Mr Shaw added: “A lot of the time we have to get residents out of their houses to move their cars, and if we are attending a house fire the time lost can be vital.

“We dread getting a call to some areas because it’s an impossibility to get there. You can literally just about get a car through, but there’s absolutely no chance of getting a fire appliance through.

Mr Shaw highlighted Norfolk Street, Werneth, Manley Road and Gainsborough Avenue in Coppice, as just some of the roads where the problem exists.

Mark Alcock, Oldham Council’s Cabinet member for the environment and infrastructure, offered to work with the fire service to halt the problem.

He said he could organise a local education initiative to explain the dangers to residents.

Individual obstructions, however, were down to the police to deal with, he said.

Councillor Alcock urged the fire service to contact him.

He added: “We will look to see whatever we can do.

“Safety of everyone in the borough is the priority of both the fire service and of the council.”