You are Here: Home » News » Park yobs to get marching orders

Park yobs to get marching orders 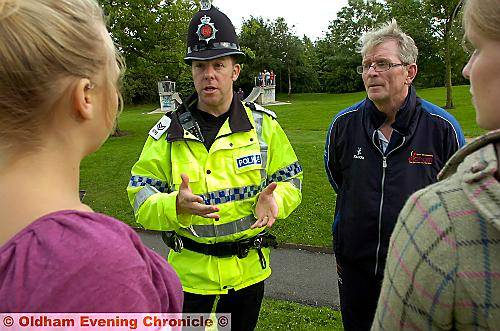 Stepping up the park patrols

TROUBLE-MAKING youths will be given the elbow from parks across Oldham as police launch an anti-social behaviour crackdown.

The move comes in response to complaints from residents in Waterhead, Derker and Sholver who say they have been plagued by nuisance children since the start of the school holidays.

The rise in incidents prompted the Oldham East Neighbourhood Policing Team to launch Safe4Summer, which will see officers stage regular patrols at Waterhead Park, Stoneleigh Park in Derker and the area around Sholver Lane and the Northgate Pub.

Working with the council’s licensing and trading standards team, officers will carry out stop and account searches.

Alcohol will be confiscated and anyone found to be behaving in an anti-social manner will have a letter sent to their parents.

Members of the council’s Community Safety Team will attempt to get youths involved in sports, music, drama and art activities to keep them off the streets.

Residents raised their concerns about criminal damage and youths congregating with alcohol at a recent Partners and Communities Together (PACT) meeting.

PC Sarah Bull, from the Oldham East Neighbourhood Policing Team, said: “Anti-social behaviour is an issue that we take very seriously and we understand the effect that it can have on residents’ lives.

“Unfortunately, during the summer holidays anti-social behaviour tends to increase because of the warm weather, lighter nights and young people being out of school.

“However, I am confident that through the launch of our Safe4Summer campaign and by working closely with other organisations and putting our officers in hotspot areas, we can have a positive impact on anti-social behaviour so that our communities can have an enjoyable summer.

“We can also use this opportunity to pass the message on to the youths that this is an issue taken seriously throughout the year and not just the summer.”