You are Here: Home » News » Brave runner has never looked back

Brave runner has never looked back 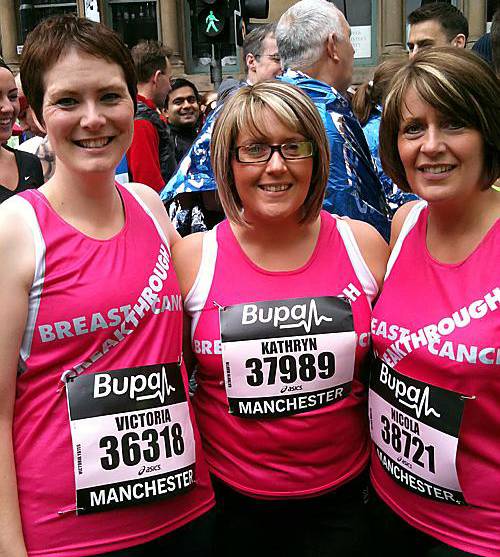 A novice runner has put illness behind her and inspired a group of friends to raise over £3,000 for charity.

Vickie Yates, from Lydgate, was diagnosed with breast cancer last year at 36.

Following a gruelling 10 months of surgery, chemotherapy, radiotherapy and hormone therapy at the Victoria Breast Care Unit at the Royal Oldham Hospital, Vickie was told there was no further evidence of the disease.

Her New Year’s resolution was to raise awareness of breast cancer and to help she decided to get fit and raise money for Breakthrough Breast Cancer, which funds research into the disease.

Vickie turned to her brother-in-law, Colin Green, from Greenfield, for help.

A keen runner and member of Royton Road Runners with 15 marathons under his belt, Colin is also a chartered physiotherapist and owner of Physio Matters, based in the village.

Mother-of-two Vickie has done so well she completed the Great Manchester 10k run on Sunday in a time of one hour, eight minutes, with a group of friends.

She said: “It was devastating to be diagnosed with breast cancer. The treatment was hard and it was a very difficult time for me and my family. But we got through it and I was determined to do what I could to raise awareness and money to research this important area.

“A year ago I was shaving off my hair after undergoing the first of six chemotherapy treatments. Now, one year on, I can’t believe I have just run six miles in the Great Manchester run.

“I had never done anything like this before, and I am so grateful to my friends and to Colin for helping wme get this far.”

The group of around 15 runners, aged from early 20s to mid-50s, run on Tuesday evenings for an hour from 7pm.

Colin said: “It has been great to see their determination and drive, training through the winter months. As most people were complete beginners, we began slowly with a combination of running and walking.

“Everyone has come on amazingly and is very supportive of each other.”