You are Here: Home » News » Abrahams launches ‘be fair’ campaign 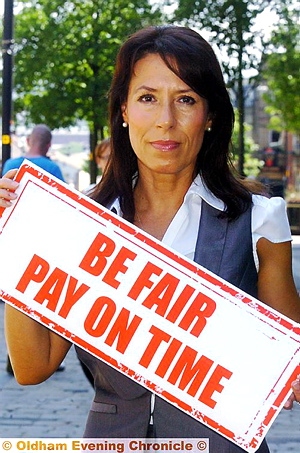 A NEW campaign aims to help small and medium-sized businesses to stay afloat in the recession.

“Be Fair — Pay on Time’ urges companies to settle their accounts for products and services on time and has been launched by Oldham East and Saddleworth MP Debbie Abrahams.

She explained: “I have had one constituent in particular who came to me as a small local business struggling to make ends meet because a larger company wasn’t paying what they owed on time. On many occasions payments were taking well over 90 days.

“Clearly there is nothing new about the issue of late payments but as we try to recover from this recession it is making life unbearable for many SME (small and medium enterprise) businesses and in many cases this problem with cash flow is what will see them go under.

“I’m calling on all companies, especially the larger ones, to review the length of time they are taking to pay for products or services they buy from companies in my constituency and to be fair and pay on time.

“What’s more I challenge companies to be open and publish their records for the time it takes them to settle their accounts.”

Mrs Abrahams also wants to hear for constituents who have been hit by late payments in a bid to establish the scale of the problem — several people had already come forward.

One business owner said: “I have been up and running for three years but now I am really beginning to struggle because my accounts aren’t being settled on time.

“As a result I’m having to go to my bank manager to request an overdraft of another £11,000. Without this I would really begin to struggle.

“The way I see it is my company does what is says on the tin. We’ve done the work, completed our side of the deal, paid out of our own money. So then we just need our clients to pay us on time, as agreed, in our payment terms.”

Craig Dean, President of the Oldham Chamber of Commerce and the CEO of Web Applications UK said late payments were unacceptable.

He welcomed the campaign, adding: “SMEs often supply services to much larger enterprises that care little about the potential damage to their own reputation by being late payers as they can easily source goods elsewhere; and at much more favourable payment terms.

“My own business is a successful, and thankfully cash rich, IT development company but at one point we had an average debt of nearly 80 days, meaning that we, like many of our SME counterparts, were effectively bank rolling our large customers.

“I welcome any campaign that highlights the damaging, unacceptable practice of late payments.”

A plumbinG and heating contractor in Oldham is among those businesses hit by the problem.

He wanted to remain anonymous and said: “We’ve spent the last 35 years working hard and building up our business and I’ve never known it so bad in terms of late payments and the negative effects it is having on us and similar-sized companies.

“When the recession hit, our industry was one of the first to feel the effects. Our regular clients’ work began to dry up and the only companies who seemed to have work were the larger companies, so we had to try and win work with them.

“The Government is supposed to be policing payments from these large companies but it must not be happening. Sub-contractors are being crippled by this and we hear nearly every week of another small business that has gone under.

“We don’t have legal departments and in most cases can’t even put up a fight. You really would be astonished at what companies like ours have to put up within the industry.

“If the Government is not careful and don’t look at this issue of late payments they are going to lose everything that is good about our construction industry and our economy in general.

“At the end of the day all we want is to be paid on time for the work we do but this is proving extremely hard to achieve.”