You are Here: Home » News » I’m victim of a garden plot

I’m victim of a garden plot 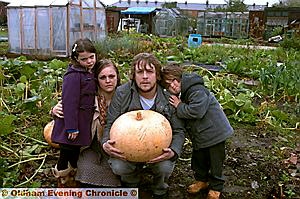 ALLOTMENT wars: Ben Carcamo with partner Natalie Muir and their children Lucy (6) and Amadeus (4), and one of the fruits of their labour — a giant pumpkin

A KEEN gardener claims he has been unfairly threatened with being turfed off his allotment — because other growers are jealous.

Ben Carcamo (28) says committee members from the Stotts Lane Allotments, in Failsworth, have issued an eviction notice because they are envious of the quality of the soil on his patch.

The trainee teacher claims the letter came without warning and said: “They have lost the plot and are trying to turf me out.”

The father-of-two, from Failsworth but now living in Droylsden, got the allotment in February, 2010 following a two-year wait.

He was allocated a plot measuring 26ft by 10ft which he claims had not been used for eight years and was full of tipped rubbish, debris and mattresses.

After a year of cleaning and planting, he has been rewarded for the fruits of his labour with with giant pumpkins and healthy crop of vegetables.

But he claims committee members have tried to get him to switch his plot because they want his nutrient-rich soil back.

He said: “The sent me an eviction letter in September saying my plot was not up to standard and that I had 28 days until October 10 to leave.

“But I’ve spent a year cleaning the plot, have done all the hard work and I’m digging in.

“There was a period over the summer where I couldn’t make it down and weeds came up.

“They were cleared but the committee has been on my case since then.

“Members are using it as an example and are trying to get rid if me so they can take my plot over.”

Council officials from the parks department visited the site on Monday and will take a final decision on the gardening row in the near future.

Mr Carcamo said the whole family loves having the plot and eating their own home-grown vegetables.

He has donated the giant pumpkins to his children’s school and said he has a five-year plan to turn around his land and make the best of it.

He said: “All the other plot owners are great, they are really supportive and offer me advice as I’m still learning.

“But it seems when the committee offered me another plot and I said no, they couldn’t believe it.

“They’re just jealous of the quality of the land I’ve been allocated.”

Catherine Charnock, committee member, said photographs of the plot and letters have been submitted to the council for consideration.

She said: “The matter is being dealt with at the moment.

“Ben has been given every opportunity to keep his plot fit for purpose and he hasn’t.

“As a committee, we want to keep standards high and we await the decision of the council.”