You are Here: Home » News » Pressure stepped up on late-paying firms

Pressure stepped up on late-paying firms 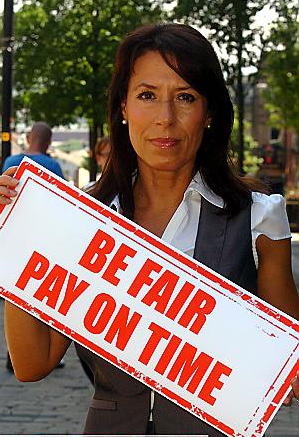 MP Debbie Abrahams at the launch of her campaign

LEADING business groups have united to back an Oldham MP’s campaign for the Government to do more to tackle late payment.

Oldham East and Saddleworth MP Debbie Abrahams launched her “Be Fair, Pay On Time” campaign to urge large companies to settle their accounts on time to help small and medium-sized businesses stay afloat.

She has already forced the Government to bring forward the new late payment EU Directive, which introduces a minimum fixed amount of compensation for late payment and tightens the time period for payment, from March, 2013 to mid-2012.

Now a group of leading organisations have increased the pressure, writing to Business Minister Mark Prisk to call for a plan of action to address late payment and drive economic recovery.

And new data from credit reference agency Graydon UK shows that 76 per cent of respondents believe the Government is not doing enough to protect UK businesses from late payment.

Figures also show small and medium-sized enterprises (SMEs) are now owed a total of £33.6 billion in outstanding invoice payments — a rise of 10 per cent in the last 12 months.

The industry bodies, which include Lloyds TSB Bank, the Asian Business Federation, the Brewing, Food and Beverage Industry Suppliers Association; the British Home Enhancement Trade Association; the British Printing Industries Federation, the Business Woman’s Network, the Federation of Master Builders and the Forum of Private Business, want measures to include the mandatory imposition of 30-day payment terms; a stop on large companies taking “prompt payment” discounts and imposing retrospective changes to terms; a national league table of local authority payers, with incentives to encourage councils to perform, and other measures.

“There is mounting pressure on the Government to crack down on the growing corporate late payment culture, which is already a huge problem for small businesses and is in danger of becoming endemic,” said Phil Orford, chief executive of the Forum of Private Business.

“Late payment and enforced retrospective changes to payment terms and conditions force firms out of business, plain and simple. It is time to tackle the problem once and for all so that prompt payment becomes the norm, unless there are good, justifiable reasons otherwise.”