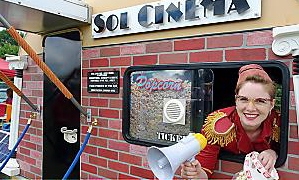 GET your tickets and popcorn here! The Sol Cinema is heading to Oldham

FORGET Cannes and Venice: Oldham Film Festival is the place to be this summer.

Oldham Film Festival sees The Small Cinema project take to the road from Saturday until June 9, with events across Oldham, Failsworth, Shaw and Saddleworth.

The Small Cinema is the brainchild of 18-year-old Sophie Barrott, from Royton. Sophie, from Riverdale Close, Royton, originally set up her 30-seat cinema two years ago with the help of a £2,000 lottery grant.

Since then the council’s Arts Development team has continued to support the community project. Regular screenings have taken place at Gallery Oldham.

Oldham Film Festival gets off to a royal start over the Jubilee weekend on Saturday with “Peter Pan” and “Singin’ in the Rain” - both released in Coronation year - at Gallery Oldham.

The world’s smallest solar powered cinema will be showing a selection of vintage films and newsreels at the gallery before heading into the town centre the following day.

Enjoy a Bollywood Bank Holiday Monday with blockbuster “Dabangg” at Oldham Library, followed by a film quiz and a showing of rock comedy “Killing Bono” at Jackson’s Pit on June 5.

For all shows and times visit www.thesmallcinema.com or find full listings at www.gooldham.com