You are Here: Home » News » Sat-nav steps too far 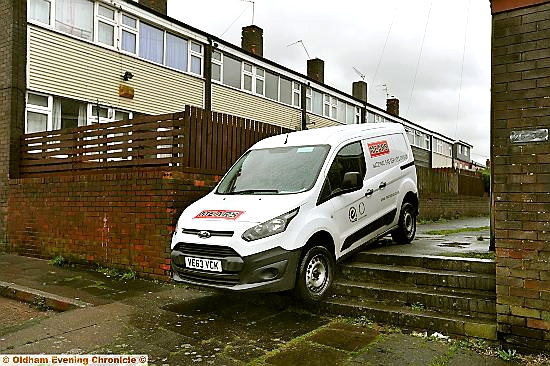 NO way through . . . the van stuck on the steps

A SHOCKED gas engineer got a surprise when his sat-nav unit sent him the wrong way - leaving his van stuck on a flight of steps.

The stunned driver was in his company van on Falmouth Street, Oldham, when his sat-nav unit sent him down an alleyway — which ended in the steps, as he realised too late.

The van suffered only and was removed by a recovery team, but local resident Diane Lamb revealed it wasn;t the first incident of its kind.

She said: “I’ve lived on this street for 30 years and I’ve seen this happen several times. Cars go down there and can’t see the steps at the end, so they just drive on. Before they know it they’re hanging over the steps.

“This used to happen along the alleyway at the back of my house until we had bollards put in at the end but for some reason none were put on the next alleyway.

“It would be really easy to stop people driving through if we had some bollards to stop drivers thinking it’s a cut-through.”