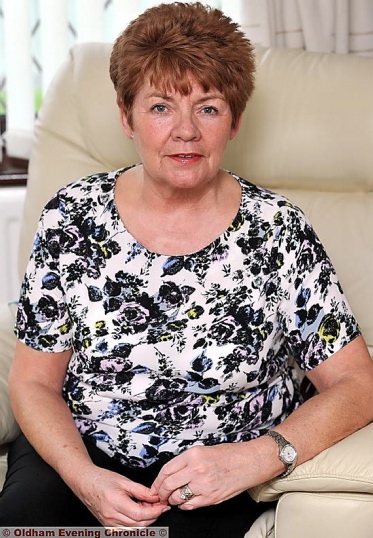 KNEE-LY there now... Barbara Chapman is due to go back to work soon after having her designer knee fitted.

A CHADDERTON woman has become a medical rendsetter after having a pioneering “designer” knee replacement.

Accounts manager Barbara Chapman (63) is thought to be the first person in the North-West with a knee created specifically for her.

A CT scan produced a 3D image of Barbara’s knee which was emailed to America where manufacturer ConforMIS produced an exact replica in a 3D printer.

“The days of one size will fit all are long behind us,” explained orthopaedic consultant Fahad Attar, who implanted the knee at the BMI Alexandra Hospital in Cheadle.

He added: “I know it sounds a bit like something from ‘Star Trek’ but this is the very latest in knee replacements.

“In traditional surgery I’d select an off-the-shelf implant then make adjustments to make it fit and invariably compromise somewhat.

“With this replacement we are providing patient-specific knee implants designed to fit the knee’s natural shape and curves.”

Barbara, from Chadderton, has suffered knee pain for years: “I was in constant pain. Driving for long periods affected me, I was struggling to get a good night’s sleep and everyday tasks were becoming a real effort. My knee was affecting every part of my working and personal life.

“I had private medical Insurance through work and decided it was time to put it to good use.”

Just over seven weeks after the operation, Barbara is walking without crutches and improving daily. She said: “Don’t accept the pain and suffering as simply a part of the ageing process. I’d urge other sufferers to seek medical advice immediately.”

Mr Attar added: “This is the future of knee replacement surgery.”