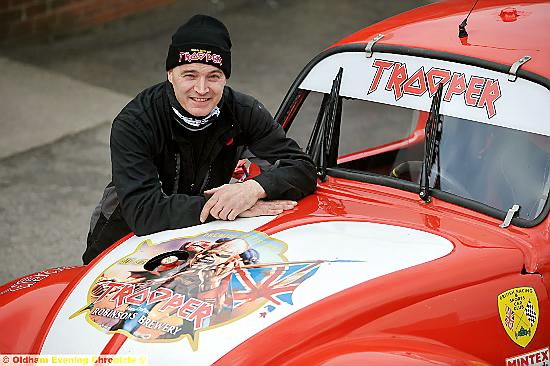 PAUL Wighton with the Volkswagen Beetle decorated in the Iron Maiden Trooper logo after the band’s frontman sponsored the team.

PAUL Wighton with the Volkswagen Beetle decorated in the Iron Maiden Trooper logo after the band’s frontman sponsored the team.

A MOTOR racing team set up by a Hollinwood garage to compete in an endurance race series has had its car sponsored by Bruce Dickinson, frontman of rock legends Iron Maiden.

Antonio is a huge fan of the rock band and a close friend of Bruce.

The team’s Volkswagen Beetle, has been emblazoned with the group’s Trooper logo.

Paul said: “Bruce is a massive petrolhead and sponsored Antonio’s solo racing career so it was natural for him to bring it to our team. It’s definitely brought more attention and money to the team which will help us be more competitive.

“We had Sky cameras in the car in our first race and having a driver like Anthony and a sponsor like Bruce is raising our profile. We finished in the top 10, which nobody expected us to do..”