You are Here: Home » News » Hands off our Tudor treasure crest!

Hands off our Tudor treasure crest! 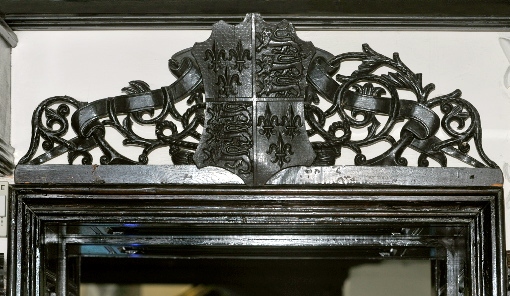 The carved crest at the heart of the refusal

Parish councillors have refused to hand over a key piece of a national treasure.

The carved crest is believed to belong to the first state bed of King Henry VII and his bride, Elizabeth of York, and dates back to 1486. The bed currently features in an exhibition at Hever Castle in Kent.

On a visit to Saddleworth the bed’s owner discovered the crest, fixed to a lintel above a door at Uppermill Library.

Saddleworth’s link dates to the bed’s purchase in 1842 by Uppermill antiquarian and architect George Shaw. He used some of its elements in the embellishment and decoration of his house, St Chad’s - now the library in High Street. He sold several copies of the bed to Victorian aristocracy.

Before selling the ancient piece, Shaw removed an heraldic panel from the canopy and fixed it over the door to his parlour - where it has remained since.

Ian Coulson, the bed’s current owner asked the council to let him use the crest in the exhibition “A bed of Roses” at Hever Castle, Ane Boleyn’s childhood home.

But the parish council’s conservation and planning committees say the crest should stay where it is.

“It is part of the story of George Shaw, who was responsible for the antique and Gothic appearance of St Chad’s,” they claim.

“The bed inspired much of the carving in the building and Mr Shaw’s retention of this component of the bed adds much to the historic importance of this surviving Grade Two listed building.” They prefer a copy of the crest is fixed to the bed instead

Mr Coulson, who bought the bed in an auction several years ago for £2,200, said: “I’m deeply disappointed. The bed is an artefact of the greatest historic and cultural importance - it’s a national treasure, created for a King and Queen of England at a pivotal point in the nation’s history.

“I cannot comprehend the logic to refuse the request to display the royal crest correctly for the nation. I’ll appeal against this recommendation and hope common sense prevails.”.

Speaking after the meeting, history expert and chair of the conservation sub committee, Councillor Mike Buckley, said: “The request is a difficult decision. The panel has enormous local heritage value, on the other hand a case can be made it rightly belongs on the original bed.”

But he added that the bed’s make-up suggests having the original crest isn’t so vital: “The bed isn’t 100 per cent original. Parts were Victorian restoration. A perfect copy of the original panel is unlikely to significantly detract from the bed’s value.”

Jonathan Foyle will give a lecture on the Tudor bed’s history, purchase and the fascinating story on June 13 for the Saddleworth Festival