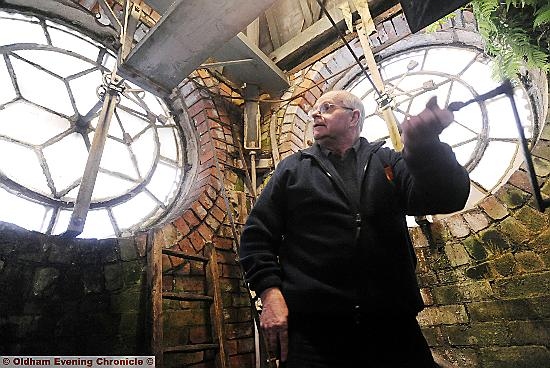 Maurice Brayford winds the clock. Pictured in 2012 by DARREN ROBINSON

TIME is standing still in Diggle after vandals destroyed an iconic village clock.

Community hero Maurice Brayford has been left “devastated” after the timepiece he tends to almost every day was vandalised.

The 68 year old volunteer has maintained the chiming clock on WH Shaw’s former pallet works in Huddersfield Road since his retirement. But the clock’s internal workings were irreparably damaged in a raid.

Maurice, who lives in the village, said: “I’m shattered by what has happened. The clock has become part of my family over the years. I visit the tower three times a week to ensure the clock is wound and everything in order. If ever I’m away, my two children take on the job.

“To damage the timepiece makes absolutely no sense. Why would someone want to do such a terrible thing?”

Maurice was celebrated by the village as a Diggle Hero a couple of years ago for selflessly keeping the Victorian timepiece running and on time. His award citation read: “He is the epitome of a good neighbour, community-minded and always ready to help others.”

Maurice added: “I wound the clock on Saturday as usual, but the following day I noticed it had stopped. I went to investigate and the door to the room had been smashed. It will take thousands of pounds to repair.”

Mark Brooks, chairman of Diggle Community Association, said: “It’s devastating news about the iconic 1890-built Grade II-listed clock tower. Why somebody would choose to vandalise the clock is beyond me. I’ll be inviting ideas at our next open meeting on June 11.”