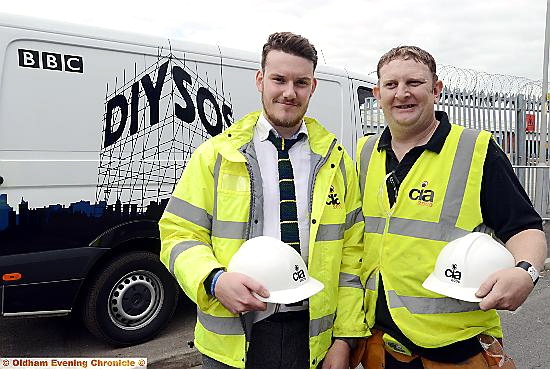 Mark Perry, a director of security firm CIA2000, left, with salesman Nigel Plumb as the crew films in Newton Heath for the show.

AN OLDHAM security firm are helping a team of hero builders transform derelict houses into a village for Army veterans for the BBC’s “DIY SOS”.

Lees based CIA 2000 is helping the team by fitting alarm systems, data networks and access control for the project in Newton Heath.

The BBC team, led by presenter Nick Knowles, has started the first phase of refurbishing homes in Canada Street and New Street. In a week they will become family homes for former servicemen and women.

Sales manager Nigel Plumb was on site yesterday to help out with the work.

He said: “It’s brilliant to be involved. We saw an advert for anyone who could help so we applied. It’s a fantastic project and we’re proud to be part of it.”

Dozens of Manchester building firms and tradesmen are helping out with the huge project, supported by veterans working with charity Walking With The Wounded and there here are around 100 working on the site.

The project is due to be completed by early next week and will be screened in October.