You are Here: Home » News » Mum’s plea for guardian angels 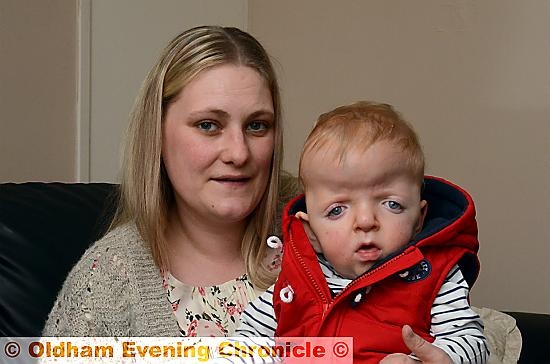 Adele Lichfield with her son Oliver Young (15 months) who suffers from Apert syndrome, a rare problem with his skull.

A CARING mother has praised the “guardian angels” of Transport for Sick Children for their help getting her young son to Liverpool for specialist treatment and has joined the charity’s urgent appeal to recruit more volunteers.

The charity, which takes children suffering with life-limiting illnesses to hospital free of charge, launched the appeal for new drivers after they were left with just three people to transport poorly Oldham children to hospital following the death of a dedicated volunteer in the area.

Adele Litchfield, from Lees, has joined a campaign after being referred to them for help getting her 15-month-old son Oliver Young to his frequent hospital appointments in Liverpool.

Oliver was born with a form of craniosynostosis known as Apert Syndrome, a rare skull disorder which means that his skull plates fused together prematurely and disrupted the normal growth of the bone before birth, placing increasing pressure on the bones in his skull and face.

There is no known cure for the genetic condition, which affects one in 100,000 babies, however specialist surgeries to re-shape the skull and alleviate pressure on the brain are offered at Alder Hey Children’s Hospital.

Adele (35) said: “When Oliver was born I would take him to Liverpool on the train for his hospital appointments but it was incredibly difficult.

“At the start he needed up to four hospital appointments a week, but that has now decreased.

“When my health visitor found out I was going all that way on the train, she introduced me to Transport for Sick Children and I haven’t look back since.

“The volunteers are so wonderful, they go above and beyond for you with no thought for themselves.

“They’ve been happy to wait when Oliver’s appointments have lasted longer than expected, missing their own dinner to help us.

“I can’t thank them enough for what they do and I don’t know what I’d do without them.”

In the past 12 months, volunteers have undertaken 896 trips on behalf of 152 sick children in Oldham, getting them safely and comfortably to hospitals around Manchester and even further afield.

Volunteers are now urgently being sought to help the charity continue to offer the same service for all seriously ill children in Oldham.

Beverley Hoyle, Stakeholder Co-ordinator for the charity, said: “For some families with children with life limiting or serious illnesses, getting to and from hospital appointments can be a significant worry.

“They may not have access to their own car and public transport may not be a option.

“Transport for Sick Children offers them a way to make sure they can get to these often vital hospital appointments without stress or expensive costs.” The charity, which was set up by a retired paediatric nurse in 1977 after a family in south Manchester asked for her help to get their child to a hospital play unit, has a team of volunteers across Greater Manchester who offer their time and car to transport children to hospital.

Families with no access to a car and on a low income are referred to the charity by a health professional for assistance, with the service able to help children with a variety of conditions or illnesses.

Beverley added: “Being a volunteer is a great way for retired residents in Oldham to stay active in their community and make a difference to people’s lives.

“They make life more comfortable for these children and less stressful for parents and do a brilliant job.”

With Oliver, who was also diagnosed with a cleft palette and Addisons disease (a disorder of the adrenal gland), now improving in health and starting to crawl, Adele has also decided to try and give back to the charity which helped her family so much.

The mother-of-three has begun a fundraising campaign and will host two bake sales to raise money for the charity.

She is also encouraging others to get involved and volunteer for the charity to help other children in Oldham who need the service.

“They have been our guardian angels,”she said.

“It has taken away so much stress and meant I can focus on getting the best treatment for my son as I don’t have to worry about transport.”

Volunteers need to own their own car and have a full licence, MOT and insurance and be able to spare a few hours a week.