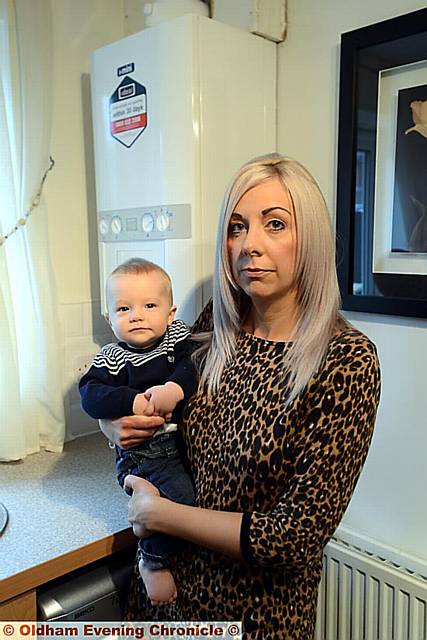 Warning: Louise Dunn found that potentially carbon monoxide was leaking into her home due to a fault with her boiler.

A MUM believes she and her nine-month-old son had a lucky escape after finding out their boiler was leaking potentially lethal carbon monoxide into their home.

Louise Dunn, from Shaw, began to feel tired and sick earlier this year, but put it down to the typical exhaustion which comes with being a new mum.

However when her symptoms matched up with a story on daytime TV about carbon monoxide poisoning, she worried it could be something more serious and booked an urgent boiler check up.

Her fears were confirmed when an inspector found a fault with the boiler at her home with the flue, designed to take carbon monoxide away from the home, left unsealed, meaning the toxic gas could leak back into the house.

Louise, who has lived in the Cape Gardens property since June, 2006, when the home was built and the boiler installed, said: “The carbon monoxide readings were very high and we had to immediately switch off the boiler.

“It was so upsetting that I had been living there with this boiler potentially damaging my health.

“It doesn’t bear thinking about what could have happened to me or my son Finlay if I hadn’t had it checked.”

After contacting David Wilson Homes, who Ms Dunn bought the property from, the company arranged for a plumber to visit and carry out its own inspection.

However when Louise (33) asked if she and her young son be put up in a hotel while the repairs were carried out, the company declined.

Louise, a secretary, said: “We were left without heating because we couldn’t risk turning the boiler on while it was still faulty.

“I couldn’t keep Finlay in a cold house and so I asked if they would pay for us to stay somewhere safe while the repairs were fixed but they said no.”

Louise added that she instead paid for a new boiler to be installed but has lodged an official complaint with David Wilson Homes.

She also warned other residents about the potential dangers of leaving a boiler unchecked.

Louise continued: “It could be a ticking time bomb waiting to go off so I’d encourage other people to get their boilers inspected as soon as possible.”

Graham Swann, managing director of David Wilson Homes North-West, said they had been made aware of concerns over the installation of the boiler at the property, which was constructed by Roland Bardsley Homes and acquired by David Wilson Homes in 2006.

He said: “Although the boiler had not been serviced since its original installation, and was no longer under warranty, we were concerned to learn of this issue and sent one of our own plumbers to investigate the concerns raised immediately on the day we received the complaint.

“Following the inspection, it was confirmed that the external flue to the boiler did have an outer seal, however it was not adequately sealed behind.

“Our plumber offered to immediately undertake the work required to seal the flue and ensure the future safety of the boiler.

“Ms Dunn declined this offer, stating that she had already scheduled her own plumber to fit a new boiler the following day.

“During our own inspection, it was noted that the boiler was generally in a poor state of repair.

“With no service history, it is not known how or when this specific fault occurred.

“Had the recommended annual safety checks been carried out, the issue would have been identified much sooner.”

He added that the company was committed to the safety of its customers and had acquired a gas safety certification from regulated heating engineers before the home was sold.

Mr Swann continued: “We also send as standard, annual reminders to customers in regard to boiler maintenance to ensure optimum safety and efficiency.

“No other similar complaints have been received by us from any other home owners at the development, however David Wilson Homes has undertaken steps to contact residents to offer a free flue safety check, should they require it.