You are Here: Home » News » Memories of Michael 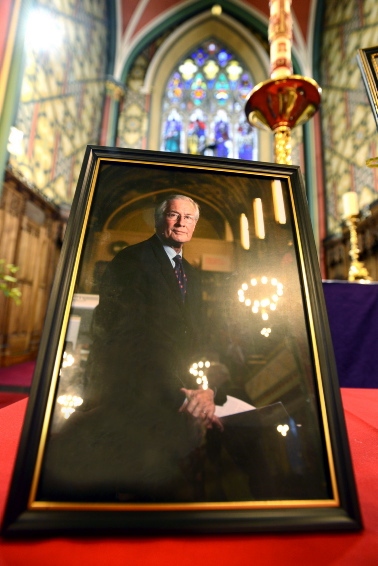 The town the late Michael Meacher served for so long said a final goodbye to its much-loved MP yesterday.

There were tears and laughter as Oldham’s dignitaries and the politician’s family members gathered at Oldham Parish Church for a a celebration of the Honorary Freeman of the Borough and MP for Oldham West and Royton.

Mr Meacher, a Labour MP and former minister, died after a short illness on October 21. He is survived by four children and nine grandchildren.

Speaking after the service, Mr Meacher’s eldest son David said: “It was an absolutely wonderful service. It did my father proud. On behalf of my family I would like to thank the people of Oldham and all the constituents here today. The speeches about dad were so beautiful and loving.”

The 75 year old Parliamentarian had been MP for his constituency since 1970, and retained his seat with a 14,738 majority at the General Election this May.

News of his death produced a flood of tributes from across the political stage and those who knew him.

Mr Meacher’s funeral was on November 13 in Wimbledon, with yesterday’s service an opportunity for local people to celebrate his life.

Leading the tributes, council leader councillor Jim McMahon said: “Michael was a dear friend to many people. Michael was a fantastic strength, somebody I could confide in without fear it would be repeated anywhere else. He made a world of difference to our community.

“Michael wasn’t Oldham born and bred but he was Oldham in heart and head.”

Shirley Buckley, who worked in Mr Meacher’s office, shared memories of their working relationship — both in the office and while out canvassing.

“He loved engaging with people on the doorstep and loved a good argument, especially when somebody said they weren’t going to vote,” she said. “He was grateful for everything people did for him. He could be absent minded, but he had an extremely sharp intellect and was a kind and generous man. He was loyal and that’s why he earned the respect from all of us.”

Debbie Abrahams, MP for Oldham East and Saddleworth, spoke of Mr Meacher’s political legacy and the issues he brought to parliament.

“How can I possibly do justice to such a wonderful man?” she said. “His mischievous sense of humour was endearing. He was incredibly kind.

“He was a quintessential gentleman, a dear colleague who was much loved. We will miss you.”

Former Ashton and Failsworth MP David Heyes added: “His constituency work gets the least publicity but it was probably the best and most important work he ever did. His name will live on in Oldham in the memories of those who knew and respected him.”