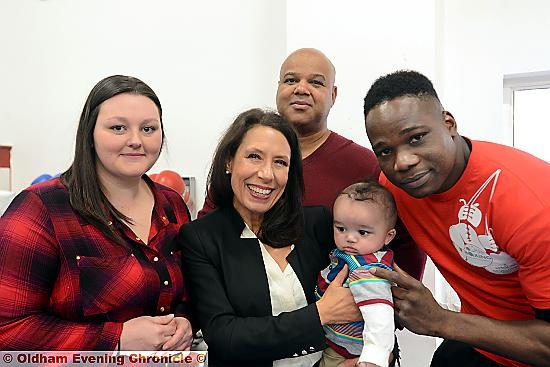 Boxer Victor Daodu has won the biggest fight of his life — the right to stay in Oldham with his wife and baby son.

Back in June the Chronicle told how Victor was taken to a detention centre in Scotland without warning, leaving his wife Robyn in tears.

Victor, from Nigeria, came to England to box for his home country in the London 2012 Olympics and applied to join the Army while he was here. He was invited back for an interview in August 2012 and was told to stay in the UK while his application was processed.

A year later the Army told him they couldn’t take him - by which time he had already met Robyn and planned to marry her. They launched an appeal for him to be allowed to stay, but his application was rejected. The couple married in April 2014, but since then Victor has been detained twice without warning and was left having to report to a “sign-in” centre once a week when released.

Robyn was heavily pregnant with their now five-month-old son Cyrus at the time — while Victor was under the threat of deportation. But now the young family has been told Victor can stay.

Debbie Abrahams, MP for Oldham East and Saddleworth, helped the Daodus in their fight, and met them to celebrate the news.

Victor, who met Mrs Abrahams at Oldham Boxing Club, where he helps to train youngsters, said: “The nightmare is over for us and it’s a relief. I have many people to thank for supporting us over the last few months but I’d like to thank Debbie and her team for helping me to stay in the UK.

Robyn said: “After so many months of constant worry we can now start to live normal lives as a family and that’s a great feeling. People have been so kind to us and we’re really grateful for all the support we’ve had.”

Mrs Abrahams has wasted no time in signing Victor up to help with her next campaign to widen participation in sport. She said: “It’s wonderful to finally meet Victor and Robyn’s greatest achievement — namely Cyrus. They are such a loving family and I am so relieved that they can now be together.”