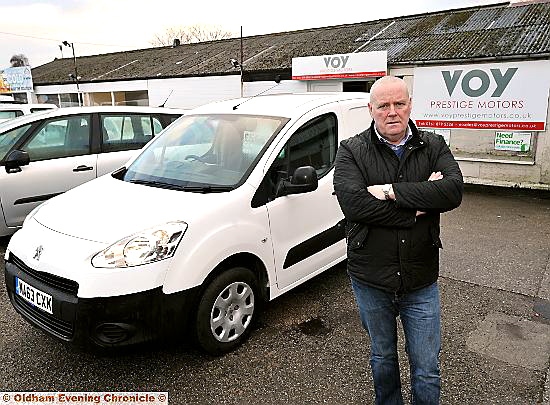 A frustrated garage boss is reeling from a double whammy after thieves tried to steal a van from his forecourt.

John Igoe had to pay £150 to retrieve the abandoned van, which was allowed to leave the crime scene by two PCSOs. But driving it back put him in the driving seat for a £433 fine from the DVLA - for having it on the road untaxed.

The tale began when John (55) left the Peugeot van on his pitch at High Barn Street in Royton. CCTV footage from a neighbouring business shows the two culprits arriving in a tow truck and dragging the white van over the pavement.

Two PCSOs then arrive in their car and talk to the men before the thieves drive off in the tow truck, leaving the van behind in the road. Officers stayed with it until it was towed to a compound on police orders.

Mr Igoe, a director of Voy Prestige Motor Company, paid £150 to have the van released from the compound in Middleton. But now a letter from the DVLA demands a further £443 to avoid court action for “keeping/using the vehicle on a public road.”

The disconsolate 55 year old said: “It’s like something from the Keystone Cops. I’m absolutely gobsmacked. I complained to police and an officer visited me. He says the PCSOs have no power of arrest and had to let them go. But to let them drive off, leaving my van - which they had tried to steal - in the middle of the road, is completely unreal.

“I had to pay £150 to retrieve my own vehicle. This letter from the DVLA just makes matters even worse.

“Because someone tried to steal it I’ve been asked for £593.00 - even though a trade plate was in the window. I am totally disgusted.”

A spokesman for GMP said an investigation was continuing: “The van was identified by the officers as having potential fingerprint evidence. It was seized for examination. The charge was a standard charge every seized vehicle is subjected to.”